Many of my building projects lately have been based on Japanese 1:150 models. I had been noticing these buildings online for quite some time, but the fact that they weren't 1:160 scared me off, until some kind soul on of the N Scale forums told me not to worry too much about it. So I jumped in!

In the spirit of that original, anonymous poster who encouraged me to give the 1:150 buildings a try, I thought I would try and share some 'side by side' comparisons of relatively common buildings found in North America, and put some typical Japanese buildings next to them.

Example 1, below, from left, is the Tomix (actually, Tomytec) Cylindrical Building, and a Kato office building, alongside a (slightly modified) cheap Model Power building. Just by looking at the photo, it does appear that the Kato's doorways are slightly smaller, and the Tomix doorways seem even smaller still. However, comparing the first four stories of the two buildings on the right, it seems like they are pretty close. The Tomix (or Tomytec?) cylindrical building does appear to be slightly smaller than the other two, but how noticeable this would be to a casual observer is hard to know. 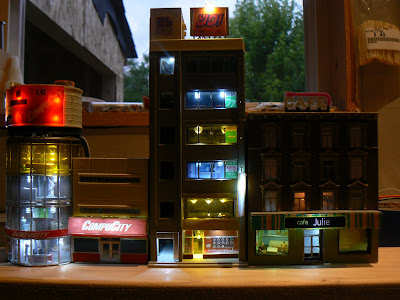 Example 2 (again, below), is another comparison between a relatively common N Scale building, the "drive in" (can't recall the official name) compared to the Tomix 7-11 convenience store. Any differences between these two are, for me, very hard to notice, and they look perfectly compatible. 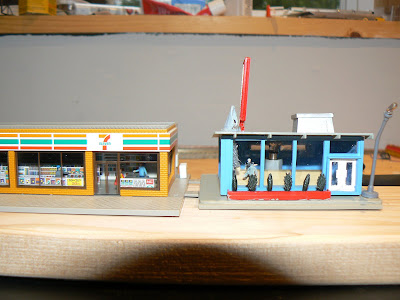 For my 3rd and final example, again, another standard Model Power building compared to a TomyTec 'Town Collection" building. In this case, the doorway on the Tomytec tea is noticeably smaller. For me, this is probably too much, and this building would likely be hidden in a little noticed area of a city (near the back, where the small door way is not noticeable and adds to depth perception?) or it becomes a candidate for some creative kit-bashing. 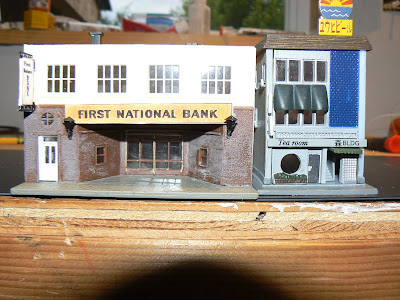 So what's the final verdict? In most cases, I have found the differences too hard for the casual observer to notice, the exception to this seems to be the Tomytec models (which, for reasons unknown to me, are different than Tomix models) which do appear to be noticeably smaller when placed nearby a standard 1:160 (or even Kato) structures. However, if these sort of details are something you can't live with, I would recommend you avoid the 1:150 structures. If, like me, you find the differences hard to notice if not negligible, then I would suggest you try one like I did and see how you like the results. There's a lot to choose from for under $20 and a whole new world of interesting, MODERN, buildings are yours to be had!

The one thing I find perplexing, and maybe I just have this whole scale thing wrong, but it seems to me that 1:150 should be LARGER than 1:160-not smaller-which is, as shown above, the apparent pattern! Anyone with any ideas on this please leave a comment and fill me and others in!
Posted by Jerry at 5:24:00 PM