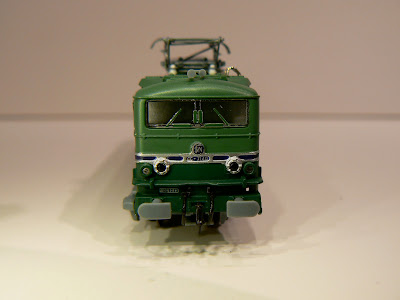 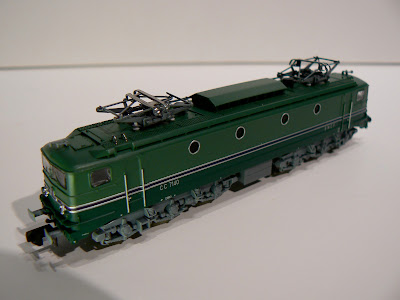 This model is from a 'new' name in the N Scale business...Star Train.  Well, in truth, they only seem new because many of us are not in Espana modelling tren miniatura, in which case you would know that Star Train is the model train division of the Spanish toy company Soldat.  At least that's what I can determine...its really something of a mystery.  As I peruse the internet trying to track down who this company is, everyone from Roco and Mehano, to Hobbytrain seem to be involved (or rumored to have been involved) in the production of this locomotive.  In fact, I was surprised at how big model railroading-even N Scale- is in Spain. 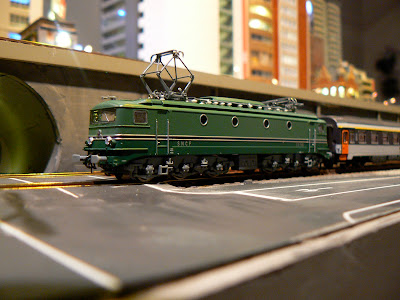 This is an SNCF locomotive of course.  The model is really well done, and its the somewhat surprising yet consistently good quality of these smaller producers that amazes me (by 'smaller producers', I'm thinking of Piko's N Scale offerings compared to traditional giants Minitrix, Kato/Lemke and Fleischmann).  Colors, detail, printing and all the castings look correct (to me, I've never seen the prototype, but what I see looks convincing), 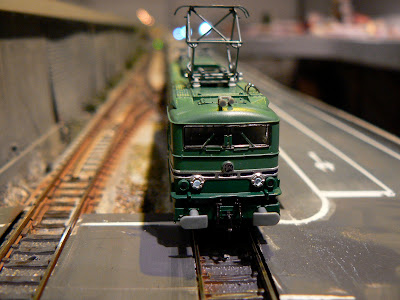 The paint is actually really well done....it may be hard to pick out in the photos, but between the silver trim work that extends the length of the locomotive, there is a neatly applied strip of blue (like the prototype).  Again, really nice work by Star Train on this model.  It also features reversing white/red LED lights, although this is one area where I think the model falls a bit short...the LED's are the older 'blue-ish' type and are fairly dim.  They are on in the above and below photos, so you can get an idea of just how 'dim' they are. 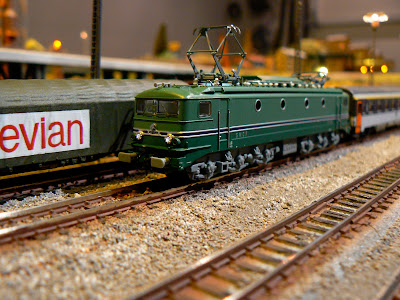 My model came pre-installed with a decoder from CT Elektronik, so I haven't had to yet open it up and look at the guts (this is a feature in my book!).  The locomotive runs really nice and leaves little to be desired.   I like it so much that I am tempted to get the similar Dutch versions of these locomotives, but there are budget limits and with so many other interesting trains available these days, I may have to limit myself to just this one.
Posted by Jerry at 11:36:00 AM