You'll notice something a bit different with this review post, a video review!  I've been inspired by a couple of video channels on YouTube to do something a bit more productive than blowing up buildings, so I'm going to try and do a bit more video!  So a tip of the hat to EWS 60008 and NGaugeUK for their instructive and enjoyable N Gauge reviews!  Of course, I have more of my overly verbose commentary and thoughts on this model below for those of you who prefer the written word!

A very recent addition to my fleet is the Minitrix 12197  8 car ICE 3 set.  This set was a complete impulse buy that I picked up at H.P.A. Schellhaß in Hamburg, Germany.  It was hard to pass it as it looked great in person and - being in Hamburg that day, I was surrounded by ICE 3's! 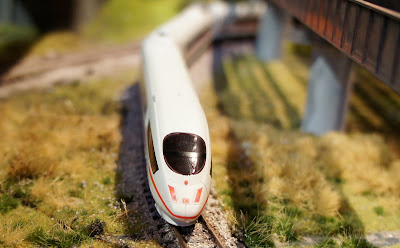 This set is probably one of the best values that Minitrix has produced in years.  You get an 8 car set (2 power cars and 6 coaches) for around 199 Euro or $280 USD.   That's not a bad price for European trains.

The biggest drawback with this set is that it lacks of any sort of lights in the power cars.  Not sure why this was the economy measure that Minitrix chose to go with...it does make me wonder what the additional cost of all of those PCB boards and wire adds to the cost of locomotives today.  But really, a locomotive without lights seems quite odd when all the others are lit.

So one of my first projects upon returning home was to install some LED's in the cab cars/power cars.  I'll  quickly add my process to how I did this in this post.

Step One was to get power from the axles to the interior of the locomotive.  To do this I used some extra brass strips that are typically used to add lighting to passenger cars.  These worked perfect for this job as the below photo shows.  The axles on the bogies are insulated, so be careful to put the insulated sides back in together on the same bogies, and have them on the opposite side on the rear set of bogies. 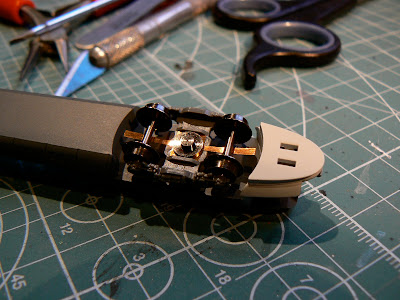 The brass strip now conducts electricity up through the pole shaft that holds the truck in place.  This shaft is held in place with a locking washer that can be (carefully!) removed (with some pressure).  Below is a photo of the shaft with the locking washer removed. 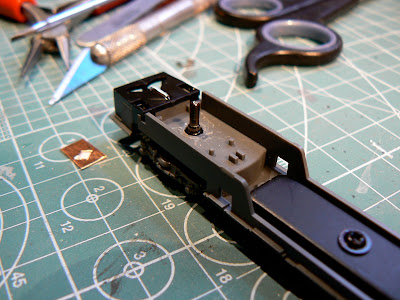 I applied a piece of copper tape to the floor of the chassis, re-attached the locking washer and - viola! - I now have a contact pad to connect my decoder to (well, I have one pole, I repeated the process on the other side of the car for the opposite electric current).   You'll notice in the below photo an area in the front that is quite open: this is where the LED would go.  I used red/white SMD LED's from LED Baron. 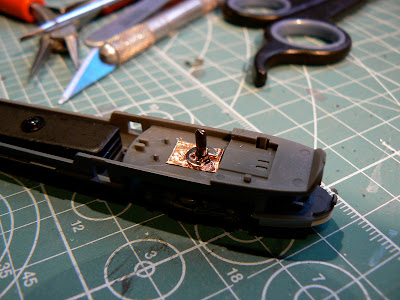 I initially installed an 850ohm resistor, thinking this would be more or less adequate to protect the LED from the track voltage and dim the light enough so there would not be too much light 'bleed-through'.

Well, nice idea! But 850ohm was not enough for these LED's and my track voltage (17v).  Here's a few shots of what it looks like with way too much luminosity! :-) 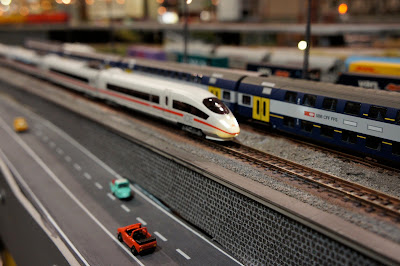 It almost looks like the front end is on fire! 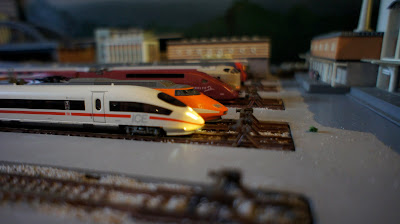 You can be sure that the train would be very visible if the prototype was that bright! 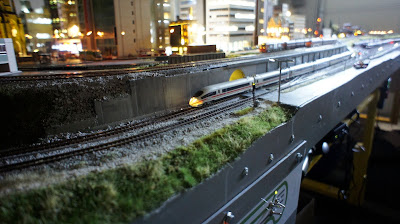 I eventually went back and installed 1.5k ohm resistors to replace the 850 ohm.  They helped, but there is still too much light (and the truth is, the white plastic is pretty thin!).  I may someday add in more resistance, but at this point I can almost live with it. 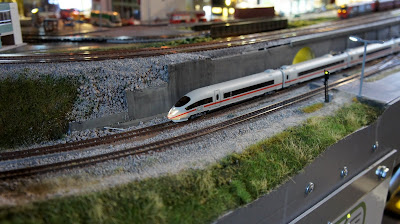 A final comment on the lighting of the power cars; I also recommend adding some additional weights to each of the power cars if your going to be using the power contact method I describe here. I put in a couple of tiny lead model weights, and it helped with consistent power pick up immensely!

Okay.... what about the model?

Really great model.  One feature it does have is the NEM651 socket for easy installation of a NEM651 decoder for quick and easy conversion to DCC.  I have to say there was no problems with installing the decoder at all!  I hope this represents some improvements with the NEM651 sockets from Minitrix as they tend to be a bit fiddly.

I was also pleasantly relieved to find that opening the shell to install the decoder was not a war of nerves to see if the shell would come off before the plastic crumbled from my attempts to remove the shell.  I'm sure we can all agree that removing locomotive shells should be easy, not too easy, but certainly not something that makes you panic!

In operation, the motor has the high quality, low noise, smooth running I've come to expect from modern Minitrix stock. 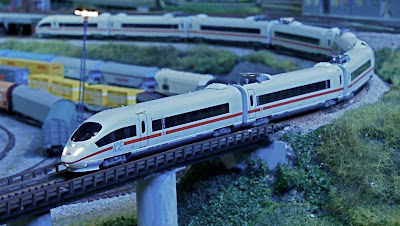 All in all, I'm really pleased with this set.   A great running set, with simple to install DCC, and fantastic operation and at a relatively good price for an eight car set!

For some nice photos of the Arnold version, check out "Spur N Modellbahner's" post here.