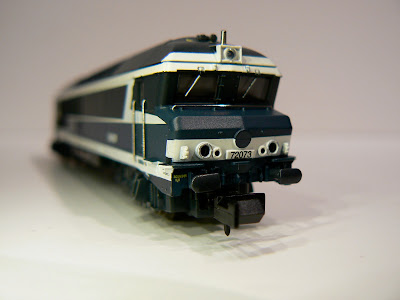 Of all the diesels in all the world, this big, six-axle monster from France has to be my hands down favorite.  Not as well known as its similar looking electric cousins with the famous 'broken nose' of the SNCF, I first came across this class in the 2001 Minitrix catalog...unfortunately this was well after this model had been produced and would only be available on the second-hand market.  Nevertheless, its extremely distinctive styling (especially for a diesel) and dramatic paint scheme impressed me and I hoped that one day I would have a chance to get my hands on one. 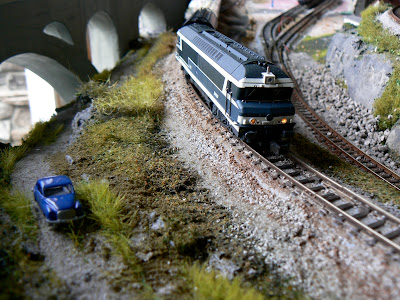 Fortunately, Minitrix re-released this locomotive as part of a digital set in 2006, and I was able to get an 'open box' version from this run.  On the down side, Minitrix is using the same mold for this model from the 1980's (based on what I've learned online- so it must be true!), so some of the casting and details are not up to the higher standards of today.  On the other hand, especially considering how old this mold is, there's nothing too embarrassing about it (like some of the models from the 1970's would be) and it actually stands up pretty well (if you don't get too close).

The CC 72000 is a cool locomotive.  They were produced between 1967 and 1974 by Alsthom.  They seem to be still running today, although it seems clear that they are entering the end of their service life (remarkable to me that they are still in service....If I picked a US counterpart...say an Alco Century 636...most of those were retired back in the 1980's!  Okay...you could say Alco isn't a fair choice, but this wasn't really a mass-produced locomotive along the lines of the thousands of SD-40's made by EMD in those days.  So I think is pretty amazing they're still running at all!).  I also note that they produce about 3400 horse-power, which is certainly respectable from a diesel of this era! 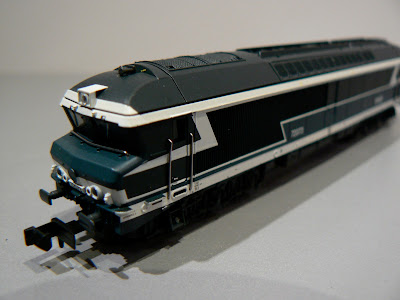 But what I really love is its looks!  How does the model hold up?

Well what is most obviously wrong to me is the size of the headlights...which seems like a typical over-sized element on many N Scale locomotives (although newer production is getting better).  Even more 'wrong' - especially to those of use spoiled by today's LED's- is the really archaic method it uses to light the two front lights.  An incandescent bulb rests horizontally parallel to the front of the locomotive...which means that you get more light from one of the headlamps than the other.  Kind of makes the engine look like it has a 'sleepy eye'. 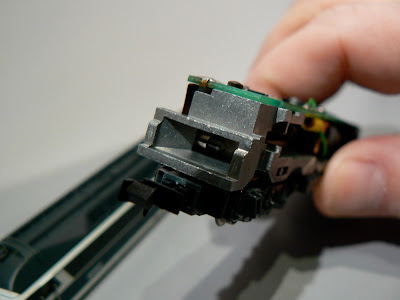 Minitrix has really invested in digital, and nice to see that they retrofitted this model with a new board to allow for a decoder (as mentioned above, this locomotive had the decoder pre-installed).   Operational it isn't as smooth as newer, high efficiency motors-nor as quiet.  However, its not bad either...certainly not as noisy as some of the 'coffee grinders' that I own! 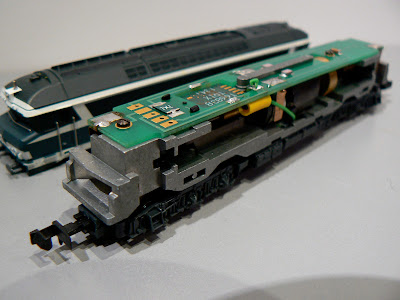 Cosmetically, the hand rail under the nose also looks too thick and too shiny compared to the prototype.  Its a relatively minor flaw, but is somewhat distracting.  At some future point a bit of weathering will solve this I think. The third lamp (top) does not light up.  Not sure if this reflects the reality of the prototype, or the reality of Minitrix production and cost-efficiencies! 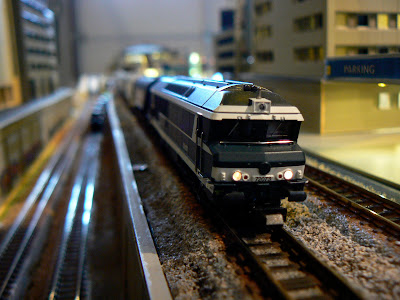 Don't get me wrong....this is one of my favorites, and I would gladly get another one (In fact, I already have...the newly released version in the "En Voyage" scheme is now in my possession!)!  It seems strong too...it certainly seems to be able to pull a lot of cars which complements the solid feel this model has! 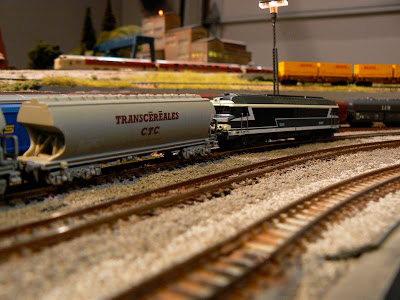 With a line of grain or passenger cars behind it, this locomotive really looks good making the rounds of the layout.  Tough, yet sophisticated - with a hint of classic 1970's design in its striking paint scheme- one of my favorites!
Posted by Jerry at 6:38:00 PM