There's nothing more fun than adding the 'icing' to a layout than adding relatively inexpensive additions like...CARS! From the bare bones Model Power blister pack, to the high end LED lit vehicles, there's almost something for everyone! Plus, the real secret to having cars (and accesible roads) on your layout, is that they are great decoys for young children! Instead of being the 'grumpy old man with the train layout' whenever some kid shows up (yours or others), now you have something that is relatively painless to let them touch and push around the layout! Of course, it helps if the wheels move so the precious little child doesn't gouge valleys into your detailed roadwork....

Anyway, I'm going to showcase a few of the N Scale automobiles I have from various manufacturers: 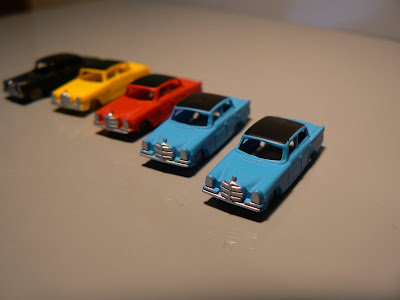 These can be found in the states in nearly any hobby shop. The nice thing is that they are very cheap...there are like 6 or so in the blister pack. Unfortunately, they are pretty cheap, ugly, and totally uninteresting. Relegate these to the back of the layout. 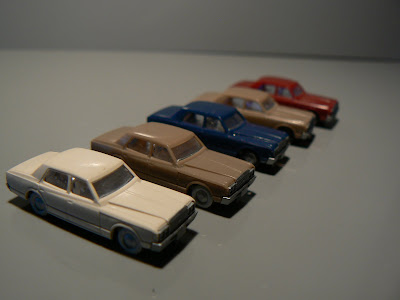 Kato sells a box of cars, usually nearby their Unitrack system. Unfortunately, Kato seems to have the N Scale contract for drab, boring, government sedans. The quality is better than Model Power, but the cars are boring. I suppose that's a huge advantage if you don't want to have flashy cars distracting from your trains, right? 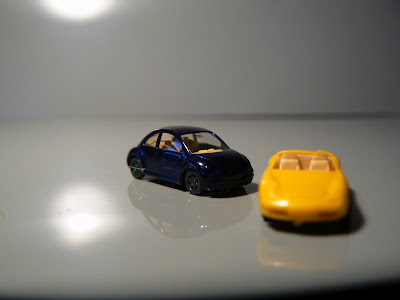 Now, finally, with Wiking - a German company I believe - we're getting into some interesting models that you might actually want to look at on your layout. They do a decent VW New Beetle and Porsche Boxster (so the box says) that come together in a package. I guess this is a 'his and hers' type of thing, right? Too bad they chose such poor colors for both models though, as neither of them look as good as they could with a better color choice. 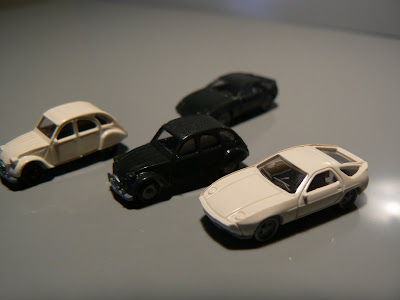 Fleischmann, better known for their crappy warranty support (oh yes, they used to make N Scale trains too. See my last post for my little rant on that) also makes a few interesting cars in N Scale. The quality is on the low end, but I like the interesting Citroen car, and the Porsche is cool too. Again, what's with the colors? How depressing. No moving wheels on these. 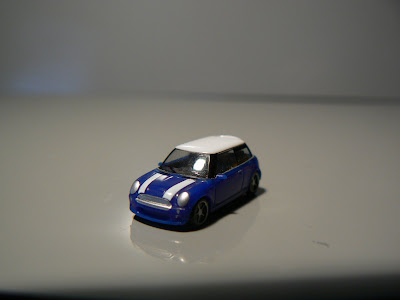 Herpa, a company which 'owns' a small-scale model airplane market, also makes a few N Scale items. I picked up a package of two Mini Coopers that are really nice looking models! The wheels even move! This is a huge plus in my book. The wheels are not really attached that firmly to the axle, so one of my Mini's is missing its back rear tire. Ah well....should have gone with the extended warranty I guess. 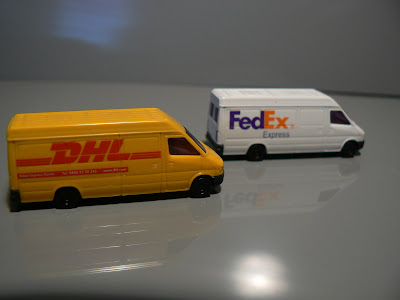 Better known for their scenery materials, Busch makes a couple of vehicle sets. My favorite is the DHL/FedEx combo. These look good anywhere on the layout...and the wheels move (VRRRRROOOOOOMMMMM!). 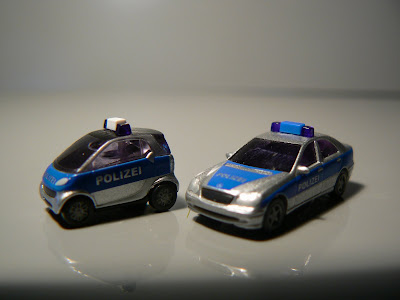 Another Busch favorite of mine is their "Polizei" combo. Seriously, who can't pass up a Smart fortwo police car? Talk about striking fear into the hearts of criminals in a high speed pursuit! Of course, as if its not bad enough that the police are using a Smart car, the wheels don't even move! 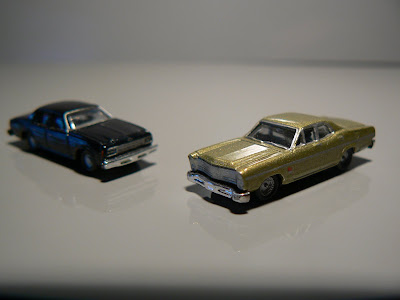 Mini-Metals does a great job of producing nice quality, metal, N scale models of classic American gas hogs! The metal gives them some nice heft, and the wheels move nicely. Nothing more fun than having the Ford Custom rip through downtown with the Polizei Smart car paddle-shifting its way after them!

TOMYTEC:
Tomytec is by far my hands down favorite 'car manufacturer'. Moving wheels, great looking cars with a lot of detail, good colors, and a HUGE selection of models and types. 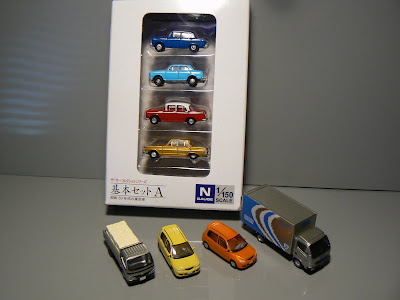 I went for the 'big one' and ordered their Tomytec Car Collection Vol 6. Although the box has way more Honda Fits, Demio's, and Vitz's than I'd ever really want, the colors and quality are great additions to the layout. 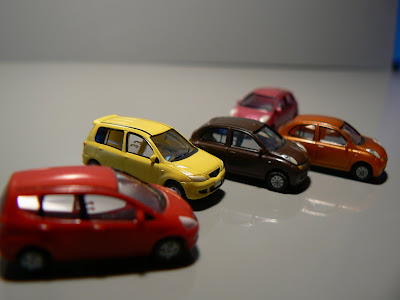 They also do a great line of trucks, trailers, semi's etc... Tomytec vehicles have become almost a separate little 'hobby' now given how cool these things are. They're not particularly easy to get in traditional hobby shops, but are easy to find a wide variety online. 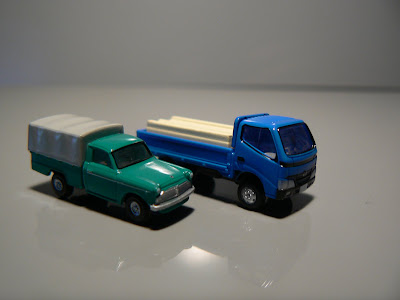 That's sort of small snapshot of my thoughts on the N Scale vehicles currently sharing the layout with my trains (not to fear, passenger revenues for the railways in Quinntopia will continue to be strong as our urban planners maliciously planned that all of our roads and highways go absolutely nowhere! Ha ha!) back to the trains and layout in my next post.
Posted by Jerry at 4:44:00 PM