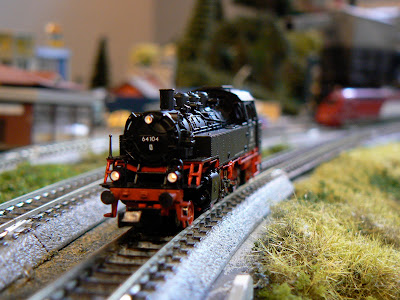 One of my favorite little locomotives is also one of my biggest frustrations.   This is a review of the Class 64 (BR 64) from the Fleischmann "Digital Start Set of the Year".

The set included the standard loop and switches many starter sets include, a small digital controller called the "Lok-Boss", various Era III freight and passenger cars, and (the star of the set) a decoder-installed 2-6-2 Class 64 tank engine of the Duetsch Bundesbahn.  The obvious benefit of this type of starter set is that it allows you to 'get up and go' right away digitally without having to make any additional purchases.  A couple of years ago when I got this set, it perfectly suited my needs as I needed an additional digital controller for a separate loop of track (now gone, see this post) , and it came with a nice variety of rolling stock (3 passenger cars and 3 freight cars).  Really, not such a bad deal for just under USD $350! 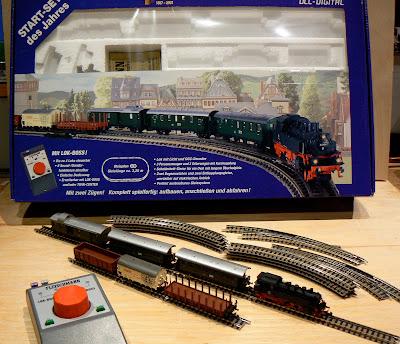 First, the locomotive is beautiful.  Fleischmann's catalogs make a lot of boasts about their attention to detail, precision, blah, blah, blah.... we read this sort of things in catalogs and ads all the time.  However, in my short experience, the difference of my Fleischmann locomotives really is noticeable and they do seem to make the most detailed and beautiful looking models.  Despite my fondness for Minitrix, a typical comparison of Minitrix and Fleischmann seems to reveal that Fleischmann has much better detail and seems more prototypically 'precise'.  Of course, Fleischmann also tends to be the more expensive of the two as well! 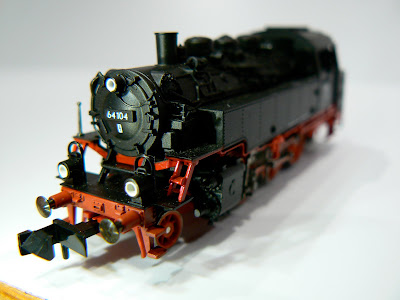 Having said that, looks aren't everything.

Right from the very start there have been persistent issues with this locomotive.  The basic problem is always the same.  The engine runs, then stops or stalls.  After discovering this problem after my initial purchase, the online hobby shop from whom I purchased this took it back for a while and seemed to discover that the 'drive rods' were out of alignment.    After repairing this, he sent it back to me, whereupon the engine demonstrated the same problem as soon as I tried to run it the first time.

So I sent it back again!  This time it goes all the way back to Germany for repairs at Fleischmann (thank goodness for the warranty!)  where it spends the next 8 months or so.  It comes back to me last fall, and initially it seems to run okay for the brief test I give it on the layout.  However, when taken out for the second time....you guessed it: Problem returns.

After this follows a flurry of attempts to identify and fix the problem.  The members of the Railways of Germany forum have been very helpful with providing various suggestions, some of them I wouldn't have thought of, others are obvious.  Before I get into their prescriptions, it should be noted that there are a couple of unique issues with my set up that may combine to be a problem:  For one, the decoder that came pre-installed with the engine is a Fleischmann 'dual mode' decoder (to allow it to work with Fleischmann's old proprietary digital control system and DCC) and the Trix Mobile Station is not regarded as, how should I say this....the most robust digital control system to start with?  So combine the two....you can kind of see that this could be a real issue.

Here is the list of all the things I was advised to check (particularly with a steam locomotive):
So I did everything from #1 to #5, skipped to #9 and tested this engine with the original Lok-Boss (which has been sitting unused for almost a year) and - eureka! - it worked!   After letting the engine 'warm up' for 15 minutes going around the small loop with the Lok-Boss, I moved it to the main layout and tried it under the Trix Mobile Station; again more success! Perfect operation! Beautiful slow speed! No stalls! Woo hoo!

Frankly, I'm just a little confused as to what was wrong and why its now working perfectly.  Unfortunately, I anticipate that this engine will revert to its old form and start 'stalling' again.  The good news is that this problem taught me just a little bit more about these little trains and the intricacies of the DCC world.   I also realized its actually nice to have an 'alternative' DCC system handy.  It was great to be able to pull out the Lok-Boss and test the decoder/engine with a different system (albeit a somewhat inconclusive test).  I also really got to appreciate the Internet dealer that I bought this through, and (despite the lengthy time spent with Fleischmann) the warranty that covered this purchase! 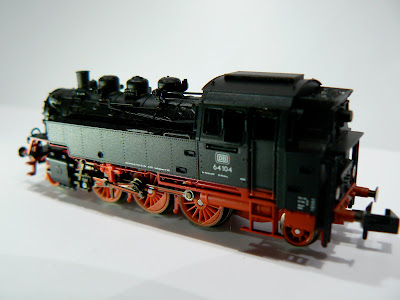