Adding LED’s and lights to my buildings is a frequent topic on my blog, but I have never really gone into depth on my approach.  The reason for this is that I am constantly evolving how I do it, which generally means I’m getting better or improving.  At least I hope so.

There's another reason too....  I have no electrical training or background.  What I know I learned from the internet.  Thus, I don't want to share any methods that might be a violation of fire codes and electrical rules.  You are warned.

Anyway, when I plan to add lights to a building, I think about three methods to lighting buildings:


I'll discuss the first two in this post, and save the longer post about 'wiring your own' for "Part 2".

This is the ‘traditional’ method and many pre-built kits come with a simple incandescent bulb already installed.   Although they are really easy to use (generally), I typically never use traditional bulbs any longer.  They are too hot and have short life spans.

A number of companies offer simple to use LED products that come prepared to accept most common forms of power for a layout.  If you want to use LED lighting, but are a little worried about soldering and/or calculating resistance, this is a good place to start. There are two basic options...LED's thare are wired 'singly' or 'strips' of multiple LED's:

An example of these that I use quite frequently come from Evan's Designs at ModelTrainSoftware.com


If you check out the various LED offerings on this site, you’ll notice the “Solid LED’s for PowerPacks”. 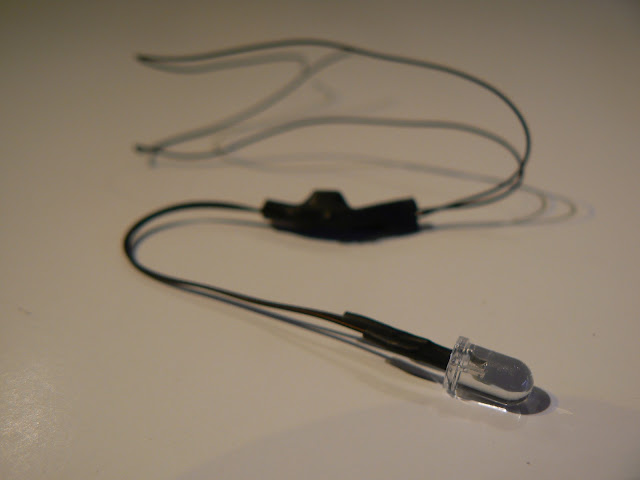 These are ‘pre-wired’ for either AC or DC power between 7 to 19 volts of power.  That should pretty much cover most of the power outputs that most layouts are powered by.

I recommend a separate source-see below, see below.

Anyway, these lights look nice for certain locations, although you may not be using these 'pre-made' / dummy-proof lights if you start to add a lot of lights as they can be a bit pricey.

Below is an example of one application of these lights inside a tunnel. 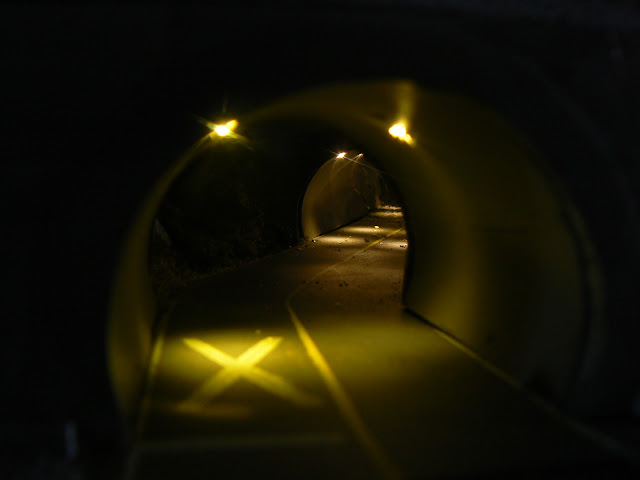 However, all this flexibility comes at a price ($3.25 ea to start), so if you want to save a little money, and already know that your power source is 12 volt DC only, you could also go with one of their $2.25 versions.

As with Evan’s Designs above, TrainAidsA also have a pre-wired LED; their “W3” LED product.

Similarly, Cosmic from Japan provides a bunch of 'ready to run' LED lighting kits that will certainly do the job.

All of the above options can get pretty expensive, so you're going to pay a lot for having single LED's pre-wired from vendors who are providing this specifically for the model railway hobbyist! To save money, I recommend doing a bit of searching on eBay, where you may find a lot of values for the same (or similar) product.

Check eBay! This seller has a lot of cool LED options, including 20 pre-wired LED's at a starting price of $0.88! Even with aggressive bidding, your cost per LED using this alternative is going to be a lot cheaper than all the above alternatives!  Warning! Some of these cheaper LED solutions from China are not the best quality and it seems like a few have failed on me after a few years.

I first 'discovered' SMD strip lights from TrainAidsA; specifically their “S12” SMD LED strips.  “SMD” LED’s are small, flat, square-ish looking LED’s.  They are also a pain to solder wires to given their small size!  The S12 products from TrainAidsA have plugs on each end which allow you to plug one strip into the socket on another strip to get longer lengths.  A really handy, and easy to use, solution that is perfect for someone who needs lights but does not want to solder anything. 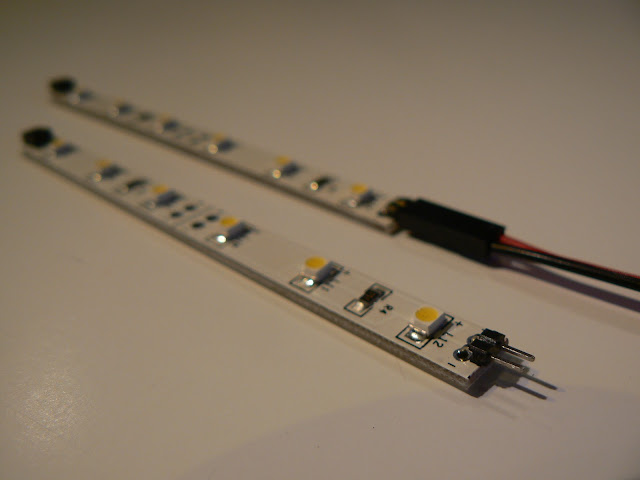 
These strips are ideal for lighting relatively long areas.  I’ve used these, for example, to light the interior of my Kato Overhead station (below). 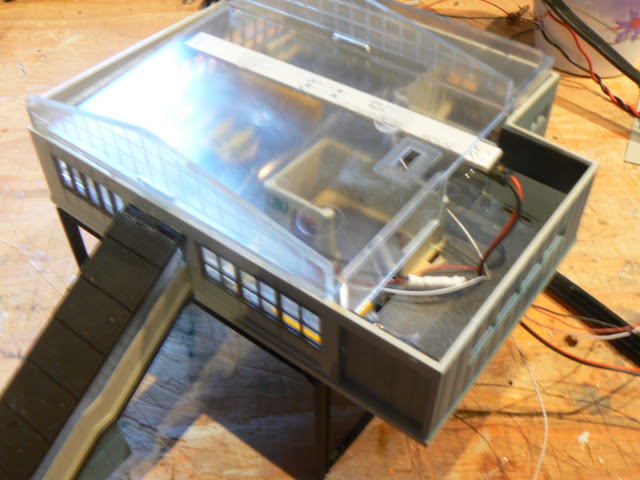 And my “Vollmer” Train station, the 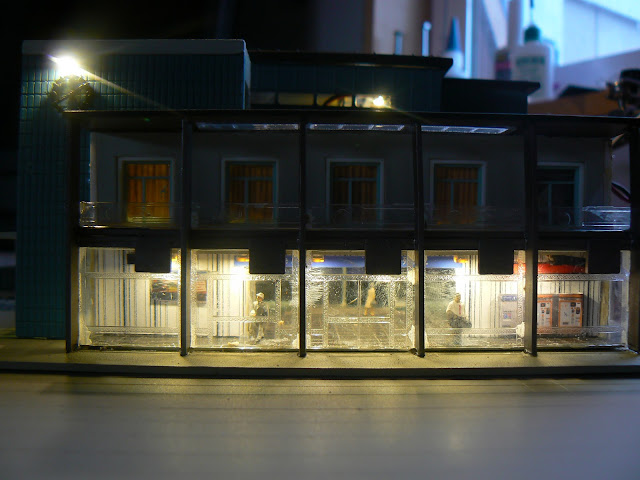 I used 6 of these for the interior lighting of the Aoshima apartments building ( Below; you can see them running up through the holes I drilled in the floor sections).   And at $3.50 each, they’re quite economical compared to the 'single LED'  methods above. 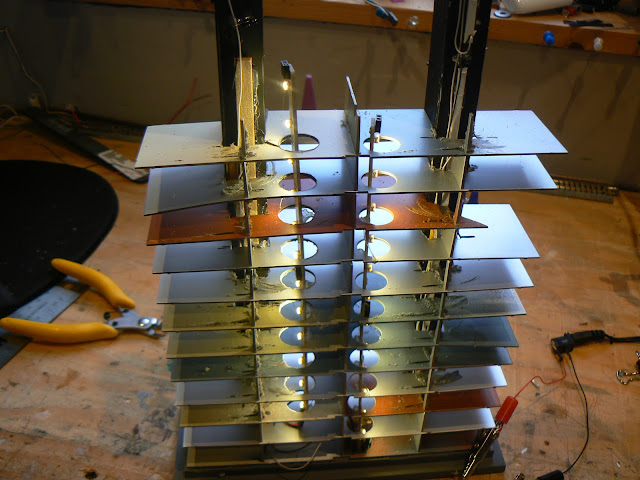 There are also longer strips of SMD LED's available (From TrainAidsA and many others, including eBay sellers) that are on flexible strips (for example, see the "Fx" product on the TrainAidsA site - see right for photo).  I haven't had that much experience with these, but they are quite handy and I expect to use more of these in the future.  The "Fx" version I used was already pre-wired for 12v DC power, so this incredibly useful and versatile strip of light was really plug and play! I used the strip at right to light the interior of the "Heljan Hilton" building. 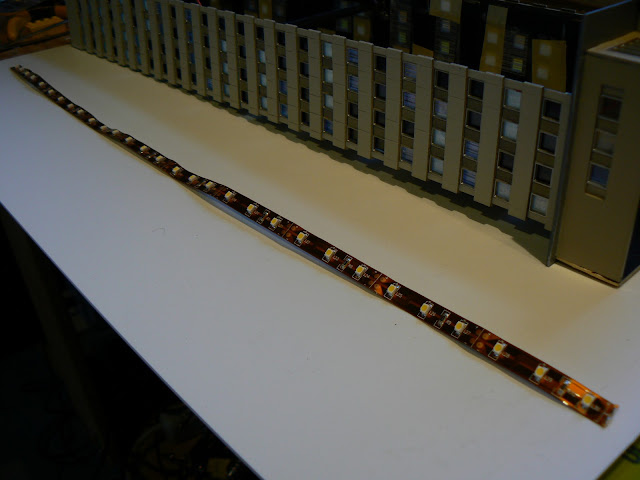 The TrainAidsA site also has lot’s of helpful information on their site that is useful for any modeler, whether you’re lighting buildings or passenger cars.

One thing that first frustrated some of my initial attempts with LED's, and unlike standard incandescent bulbs, is that the polarity of the wiring to the LED is critical!  If you hook up power the opposite of how it should be, the bulb won't work!  I won't go into detail on this, but just be sure you seriously consider both ends of your LED power inputs and the color coding on the leads!  Its important with the above 'pre-wired' solutions, but critical with 'wire your own' circuits, which I'll talk about in another post.


KNOW YOUR POWER SOURCE (and standardize on it!)
I'm putting this last, but its probably one of the first things you need to consider before you start using LED's.  Unlike incandescent bulbs, which are generally very tolerant of different voltages, etc... LED's depend on the right type of power at all times! 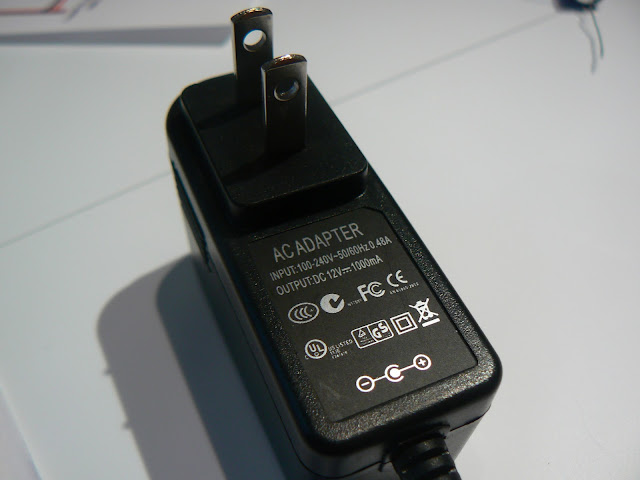 With any of the above ‘pre-wired’ LED options referred to above, its critical for you to know the source voltage that you’ll be using.  I decided from the start that all my building lighting, in fact, all of my lights anywhere on the layout, will run off of 12v DC.  Having this as a standard will make it easier for all sorts of calculations and ensures you always know what the source voltage is.  Although it might be tempting to use various sources of DC power from old cell phone chargers, video game consoles, or any power supply that you can find (most devices that I’ve seen indicated their output on the device somewhere), you’ll quickly create a potential disaster if you use a 9volt here, a 5 volt there, a 14v…well, you get the picture.  I have chosen to use a 12v DC power supply from Evans Designs.


My rough math tells me that I can probably easily support about 40 or so LED's with each of the power supply units.  Probably enough for a small town, but I'll have several for my city!

In summary, their are several options for the non-electrical engineer to start using LED's on their layout with a fairly gentle learning curve.  I still use many of these, but the 'pre-wired' options are not only relatively expensive, they also limit you to some basic light configurations.  If you have more specific needs, I'll talk about how I solder and calculate my own LED circuits in "Part 2".