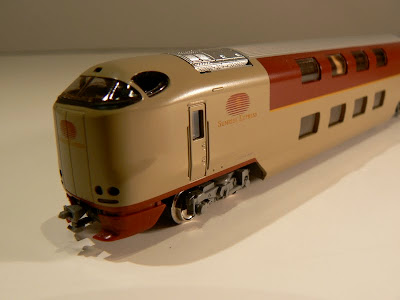 Good morning train lovers of the world!  To break up the recent stream of French locomotives, here's a fantastic-looking train from Japan! The Kato Series 285 Sunrise Express! So grab some coffee, plant yourself in a seat, and hang on for an early morning, caffeine-fueled double-deck rush across the Japanese landscape! 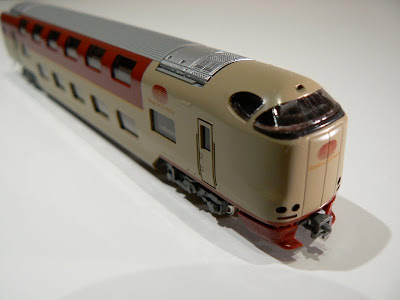 One thing I like about this train is those crazy looking windows high up on the cab! Neat!

This was a relatively easy DCC install, and rather than show you the details here, I'll just refer you to this great post on the JNS Forum from Inobu who provides instructions on how to install the decoder on the nearly identical chassis/motor of the JR 500.   I used the standard Digitrax DZ125 which not only seems to be working for me lately, they are quite cheap!

As with many (most?) Kato train sets, the motor car is usually one of the center cars, which means you'll also need to install function decoders in the cab cars to get the lights to work properly.  I haven't done this yet, so rather than directionally controlled white/red lights...I have full time orange lights. 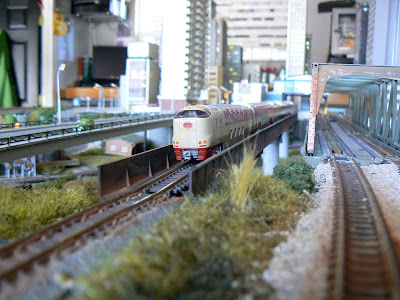 This is another exceptional model from Kato.  I love the 'tinted windows' and the near flush appearance they have.  I got excited about this model seeing a video of the prototype, and I have to say the model has all the drama and uniqueness of that video experience I originally saw! 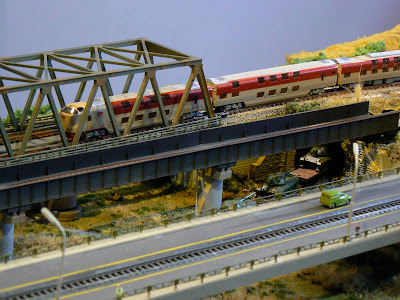 They say a picture is worth a thousand words, so rather than me telling you how great it looks, here's some photos.... 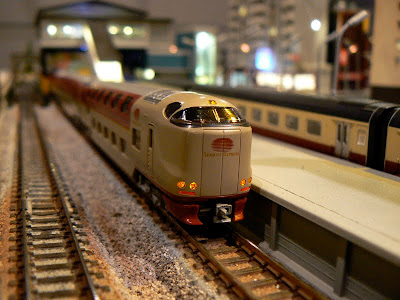 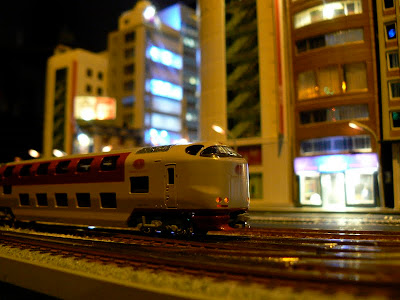 I'm tempted to make one modification...the original video (see below) clearly reveals that the bogies/trucks are not the pristine (and shiny!) light grey that Kato provides them with.  They are a noticeably red/brown rusty color.  And i actually think they make the model look a lot nice.  I'm tempted to weather up the trucks/bogies to get this same look.

I'm also a bit on the fence about installing interior lighting....it always seems a bit disappointing with all the flickering and such, and the lighting always seems way too bright for the prototype.

Ironic huh? A guy that puts lights in all his buildings and runs trains from all sorts of countries is now worried about being 'prototypical'? 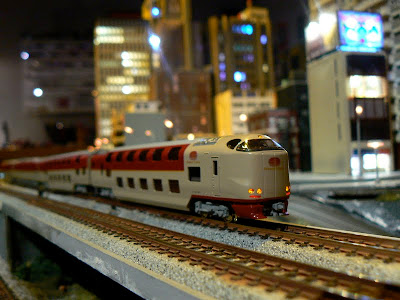 Video proof that even Japanese trains can use a little bit of weathering: