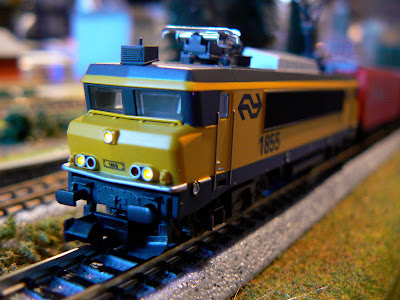 There is something compelling to me about the Nederlands Spoorwagen, or Dutch railways, that I enjoy modeling.  It could be because  I've made several trips to the Netherlands and have always found the Dutch to be a smart and friendly people (that many of them speak English also helps for us language challenged Americans). 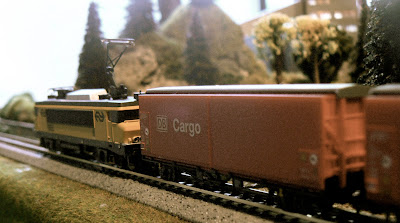 It could be the distinctive paint schemes of the Dutch railway; the massive interurban system of rail transport in the Netherlands, the diversity of its fleet, and the general rarity of these locomotives in N Scale considering the much greater supply of German, Swiss, and Austrian prototypes (or North American or Japanese! But those are different continents, so we'll stick to Europe for this post).

So in addition to being an interesting railway, this is a really interesting looking locomotive.  These locomotives were produced in the early 1980's by Alsthom, and are based on the French SNCF Class BB 7200.  Minitrix also does several versions of what appear to be the same shells for the the French versions as well.  Contemporary locomotives have gotten much sleeker, which makes the distinctive design of this engine something of standard bearer of 1970's industrial (European) design in my view.

Looking at this Minitrx model, I think the detail is a bit of a mixed bag.  While some aspects, like the "Endhoven" heraldry are sharp and crisp, some the yellow paint shows over-spray and is not very sharp.   You can see a bit of this above the cab in the below two photos of you look close enough. 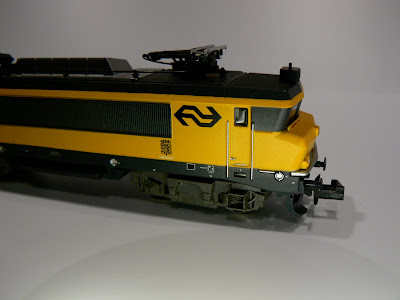 Compared to the prototype, there are also a couple of other things that stand out.  The grab iron (I think that's its purpose) below the windshield is really thick and is too prominent, and apparantly the wrong color (the Fleischmann version of this locomotive appears to be a little better); the number on the front of the cab is actually a raised rectangular area on the prototype but just a stamped box on this model (perhaps a short-cut compromise from the casting of this for both an NS and SNCF versions?).  Finally, the trim around the lights is painted a bright silver, which I cannot see on any prototype photos (it appears to be black on the real thing, although its possible that's just road grime and they come from the shops with these clean silver trimmings which don't last?).  To their credit, Minitrix is doing a pretty good job with the color on this locomotive in terms of its opacity.  Compared to an older Minitrix model of the Class 1200 that I have, the sharpness of the paint on this version is remarkable (of course, any comparison of any model more than 10 years old in N Scale will probably be the same). 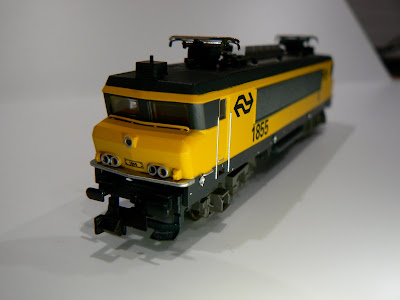 On the plus side, converting to DCC was a cinch.  The below photo shows the NEM 651 connection with the decoder installed.  I experienced no problems at all with this conversion and it took me less than 5 minutes from taking the shell off the locomotive to running a newly added DCC loco to the layout. Yeah, I wish I could say that more often! 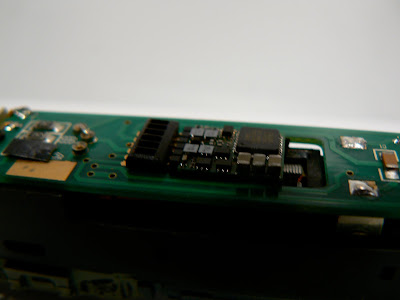 Operation of this locomotive is a treat.  As with every Minitrix locomotive I own (well, the new ones, not the old 1200 Class from the eighties I mentioned earlier!), it is QUIET and has flawless slow speed movement.  It glides through all my Kato switches (both #4 and #6) with no difficulty and seems to have enough power to pull trains in the 20 to 30 car range. 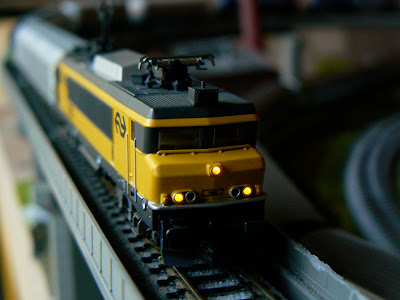 My enthusiasm for this locomotive is only slightly tampered by some of the cosmetic disappointments.  I wish I had the chance to see the Fleischmann version up close and/or do a side by side comparison.  Fleischmann's reputation (and the 30% higher cost!) would seem to indicate a much higher level of cosmetic detail and potentially a more fulfilling purchase.  I do think I'll ultimately apply some light weathering to this engine to make it look a little less toy-like, which is the only real drawback I have found.  On the other hand, this locomotive is on the low end of the price spectrum for Minitrix (USD $130 ish), so for a 'value' purchase, these are some trade offs I can also live with, or attempt to overlook.  Overall, a 4 out of 5.
Posted by Jerry at 3:46:00 PM