And now time to look at one of the Fleischmann models on the layout. I actually was thinking of posting some more layout pictures since I haven't really focused specifically on that since I laid the track down and completed most of the wiring connections, but I think that sharing my photos of these locomotives on the current layout - while also giving a 'user's opinion' of them-is a decent way to 'kill two birds with one stone'. 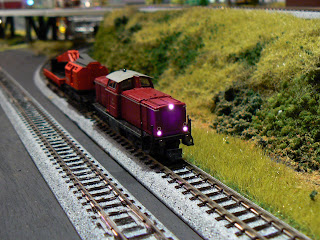 On to this post's model....this is a model of a DB V100 with a pre-installed digital decoder, giving it the '8' prefix in Fleischmann's catalog. The detailing on this, like many of the newer models from Minitrix and Fleischmann (don't know about Roco, but I assume this is true) feature a higher level of detail than past versions of these locomotives. I would go so far as to say if you did not know the scale in the photos, you could assume they were HO (except for those classic Rapido stype couplers! Which I don't mind saying that I love for their simplicity and functionality, but I know many people despise them). In fact, before I acquired this locomotive, I had a low impression of Fleischmann quality, which was probably influenced by seeing a lot of Fleischmann HO stuff in the states in the 70's that was never really taken care of (e.g. it was usually in boxes of 'junk' at swap meets). I was very young at the time, but that association sort of stayed in the back of my mind. I am glad to see that it was not true....or at least, is not true today. The locomotive has proven very durable and has even survived a fall from the layout to the floor (which has a thin carpeting material over the concrete....not much protection for the dreaded dropped loco!!!). 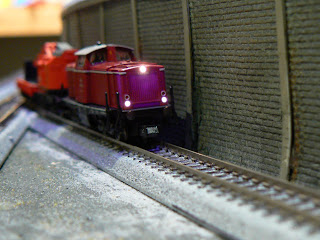 Impressions:
Pros:
- Its digital operation from the decoder was flawless from the start. Right out of the box, never had a problem with the programming or operation with either a LokBoss or the Trix Mobile Station.
- Detailing. As mentioned above, it looks great, the headlights have the appropriate amount of brightness.
- Motor: Not the strongest locomotive by any means, but a solid motor, although I find it does work better after having 'warmed up' a bit.
- Insensistive: This locomotive seamingly retains solid electrical contact through virtually all conditions. One of the more reliable operators on the layout.

Cons:
- None to speak of. I've owned it for about 6 months, and no issues. Let's hope that continues! 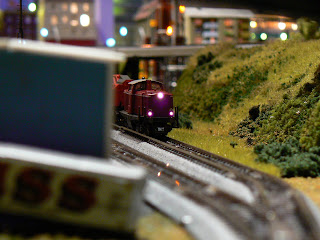