One of my most recent acquisitions has been this Arnold model of the SNCF X73900 diesel railcar in the scheme of the regional rail authority of the Alsace Lorraine region. 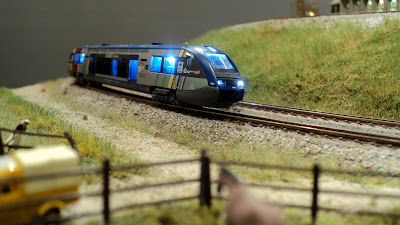 My video review covers a lot of of my thoughts on this locomotive, so I'll try and briefly make a few observations if videos are not your thing.    First things first...this is what would be called a 'railcar' (I slip and accidentally call it a "DMU" (Diesel Multiple Unit") in the video, which is obviously incorrect as there is no 'multiple!') which is essentially a self-powered diesel powered locomotive for transporting passengers.  Not common in the USA these days, the best example in history would be something like the old RDC ('rail diesel cars').   For the SNCF, these classes are called 'autorails'.   According to Wikipedia, this class was developed jointly with the DB and have been in operation since 2000.   I was initially unclear on the distinction from the identical X73500 and X73900 versions, and discovered that the X73900 (the version I have) is designed for cross border transport. 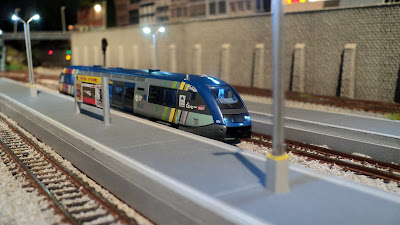 First off, the cost is pretty high....this unit cost me $209 USD (well, it was a birthday gift), which in my view is too much for a locomotive or a 'railcar' (the exception being more complicated steam locomotives, or 'big' complicated units like the crocodile, etc..).   I won't go so far as to say I still think its a good value, but it certainly is well done.  It goes without saying that you should expect the interior lights, reversing LED's and easy decoder install via NEM 651, all of which this railcar has.  So far so good. 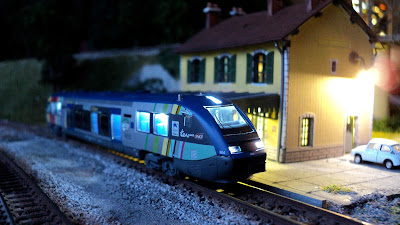 The design is definitely modern and has sleek looks.  It does fine on my sharpest radius curves (282mm Radius Katos) but it definitely does not look very good doing so!

Where Arnold did a very nice job was in the decoration.   Obviously, we've come to expect crisp and sharp printing, but I am still a little amazed each time I get up real close and see to what can be achieved these days.   Very nice! 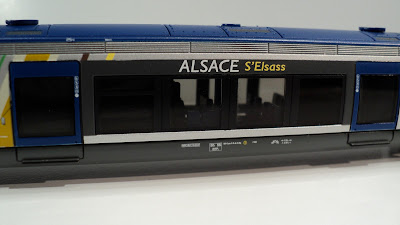 There are multiple versions from Arnold available (as well as even more alternatives from a small French  manufacturer called Mikado train).  My version is the livery of the local rail authority for the Alsace -Lorraine region - which is not only strikingly colorful, but is also the home of some nice memories from my visit to Mulhouse and the Cite du Train museum last year! 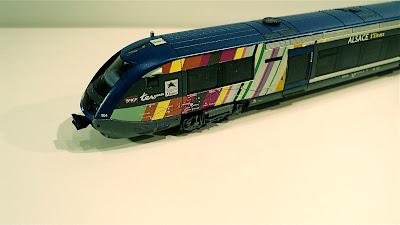 My one concern or annoyance...it seems slow!  With this sleek design I would have expected a bit of a 'racer' (although, not TGV speeds of course!) rather than what appears to be some rather slow gearing.  Nice for slow station stops, but not going to set any records!