Lighting for Buildings - Part 2 (Solder your own) 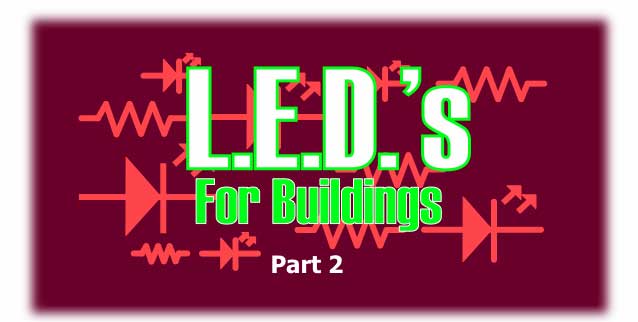 In Part One, I explained some basic LED products that you can buy that pretty much anyone can use without too much in the way of calculating resistance or doing a lot of soldering.  In this post, I'm going to talk about how I calculate and assemble my own LED circuits.  While that might sound somewhat complicated if you don't have any electrical training or experience, there are some basics to it that are really simple and most people can do this.
Again, I want to stress that I don't have an electrical background and this is just the method I use, which may not be the right way to do things.

If you’re go the “Solder Your Own” route, there’s some basic things you’ll need:


Those are the basic tools, all told this should easily be under $30.  Now you’ll need some supplies.  The main supplies you'll need are:

WIRE:
For wiring together LED’s, I like the 30 AWG wire.  You’ll need both red and white (or black) colored wire. 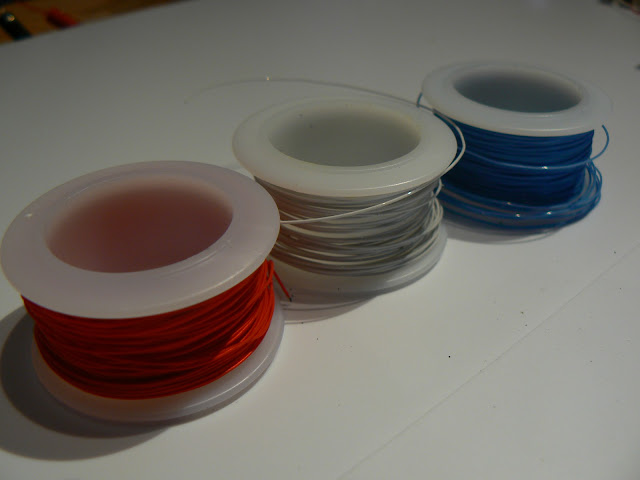 There are hundreds of options.  There are a couple of key pieces of information you’ll need:

There are a lot of other specifications for LED's but the above 5 are the key items I look for when I'm shopping.  If you want to dive a bit deeper into LED's and their specifications, check out this helpful information for beginners like me.

Check out this link for more detail  Again, you have hundreds of options, but this part is critical.  If not for the resistor, your LED’s will go “pfft!” faster than you can blink!  The simple utility they provide is to provide ‘resistance’ to the electrical current so that your tiny, sensitive LED doesn’t get fried with all of that electrical current.  If you try and hook a 3volt LED directly to a 12volt power supply, it’ll fry.  A resistor- and specifically the correct size of resistor- will ‘ramp down’ that 12 volts of power to something around the 3 volts that your LED can handle. It also needs to have correct ‘wattage rating’ so that it doesn’t overheat.


There’s lot’s of useful information on resistors at these locations:

Even if your only wiring up one LED, its called a circuit.  So don't let that word scare you off.  Here are my steps:

Now that I know the above information, I go to this fabulous site that will actually tell me how to design my curcuit: http://led.linear1.org/led.wiz


Its very simple, enter the values for each of the 4 above items, press "design my array" and you'll have a picture of the circuit you need to design!


For example, let's say I have 10 LED's, each with 3.2v Forward Voltage, and 20ma Forward Current (and my 12 volt DC power supply), the tool tells me I have two options to build this circuit
I could build the below one, which shows 10 LED's and 4 resistors.  Note that there are 3 sets of 3 LED's with a 120 ohm resistor, and a single LED with a 470 ohm resistor.

Or, you could build this curcuit....where you have 5 sets of led's which all use the same size resistor (330 ohm). 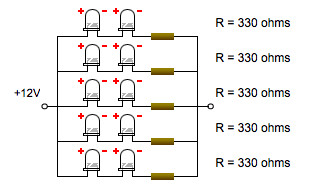 The choice is yours.  Notice that the above charts conveniently show you just how to wire your LED's: 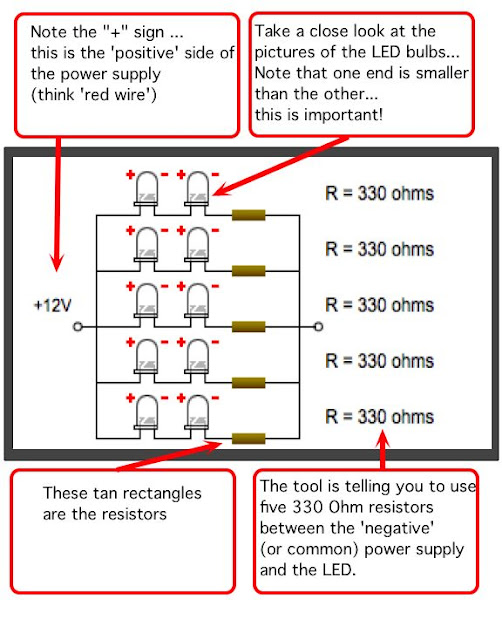 I think (incorrectly probably) that an LED has a 'negative' and a 'positive' side just like your normal household electricity (this is technically incorrect from some of the discussions I've read, but not really important right now).  In reality it doesn't matter which one is which as long as you follow the above diagram precisely in how you connect the LED's to the resistor, power, and each other.  Look closely at a real LED and look at the picture below:

Notice the gray parts inside the bulb?  They are different shapes.  Notice the red 'plus' and 'minus' sides?  That tells you the polarity, which is critical.  Now, look at a real LED and you'll see the same parts inside the bulb.  This is all you need to know at this point.  If you want to know more, check out this link.

This step is sometimes combined with Step 3 (install the lighting) depending on how you want your lights installed in your structure.  Basically what you are doing in this step is putting your wire, LED's, resistors together into a circuit (following the above diagram for example) with your soldering iron and solder.

How you do this is something you should have planned way back in Step 1.  Often, I am installing the LED's in the floors so that the bulb is sticking out of the ceiling in the floor below.  I then solder the LED's on the building floor.  This is tricky as its easy for the hot soldering iron to melt plastic, and you want to make sure you keep the conducting parts of your circuit (exposed wire, LED leads, etc...) from coming into contact with other parts.  This will be bad and will cause a short circuit which may ruin all the LED's you've installed (or worse!).


The below photos show the progress of creating a cicuit in this way: 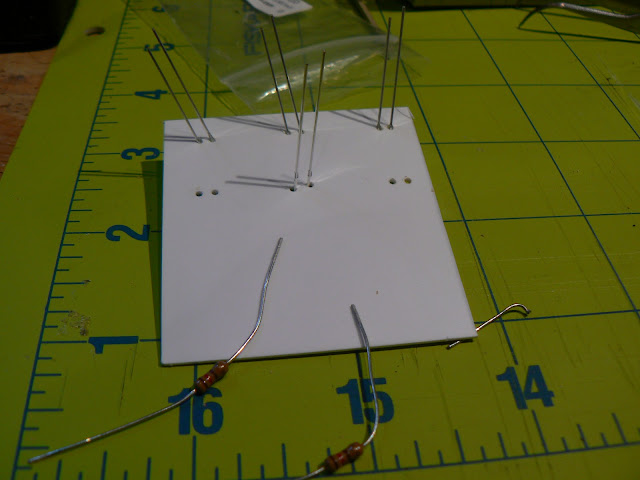 When I insert my LED's into the plastic, I ensure that the orientation of the anodes and cathodes (or the 'big and small parts' inside the bulbs) are all oriented the same way so I know just what lead gets the resistor, which lead goes to the next LED, and which LED goes to the positive wire. 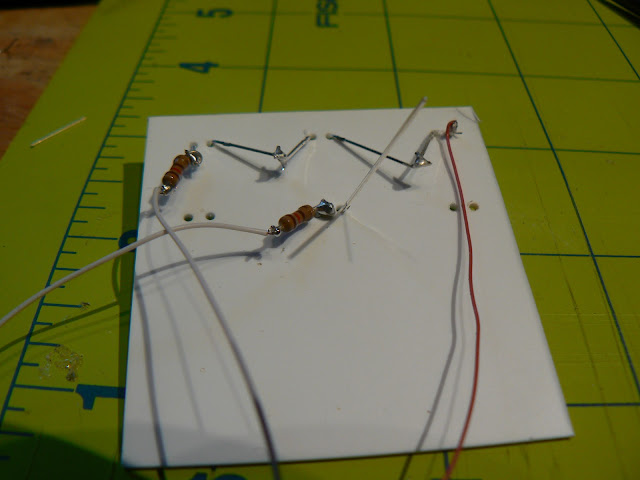 I always test my LED's after I complete a circuit....its very easy to confuse a lead here or there or make a poor soldering joint, so good to check your work before you glue it into a building!  The yellow tape on the white plastic is call Kapton tape and I've found this to be useful for insulating the conductive parts of the circuits on buildings.  Much better than black electrical tape which has a tendency to lose its adhesiveness. 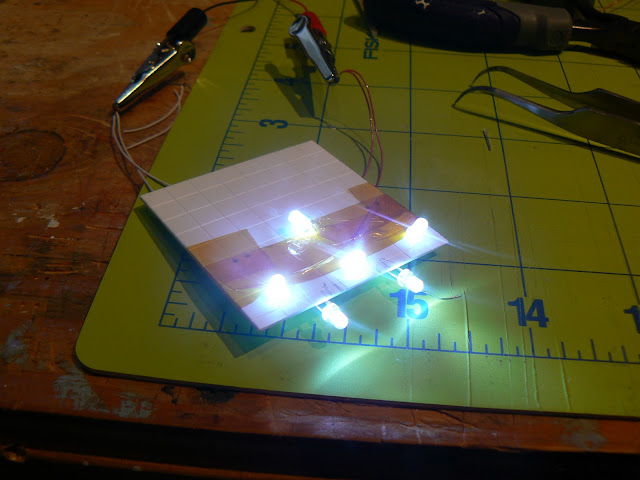 Another thing to plan for is where not only your wires will run, but where you will place the multiple resistors for your circuit?  The below shows one building where I put all the resistors together and ran their leads to various LED's throughout the building.  Its hard (for me) to keep this part of the work orderly, but its important if you have a problem you need to check. 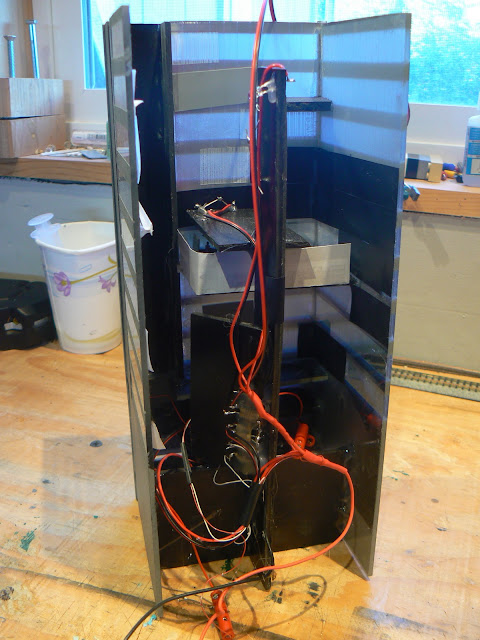 Once you've reached this point, your building should be just about ready to plant on your growing mini-metropolis!  Because of the LED's relatively low heat output, you can do some interesting things with them, such as adding them to signs that are made of translucent material.  You do need to exercise care, and I highly recommend you read some of the links in this post to get you started if you have questions.  Anyway, I've been asked before how I light my buildings, and between this post and "Part One" you now know all my secrets.  Good luck!