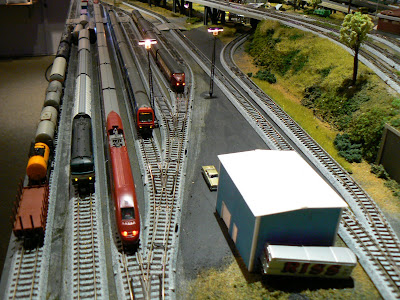 Kato's N Scale Unitrack system was, and continues to be, a very happy experience. I had a few bumps along the way (some of which were unique, but I share them in the interest of passing along my learning or mistakes) but this is one of the few investments I've made that I would do all over again. Is it right for you? That depends....

First, I doubt that I would have much interest in this hobby if not for the simplicity, functionality, and capabilities that Kato Unitrack provides. Yes, there is an obvious sacrifice in terms of prototypical realism, but there are ways around this (one of which I may attempt is to apply some 'rust' paint to the rails, and use diluted India ink on the plastic ballast which, according to other sources on the Internet, not only makes it more realistic but takes down some of the 'shine' of the ballast). For me, the ability to remove, add, and then continue to use the same piece of track after multiple revisions is a capability that makes up for the somewhat more pricey nature of this track and its subjective questionable prototypical appearance. 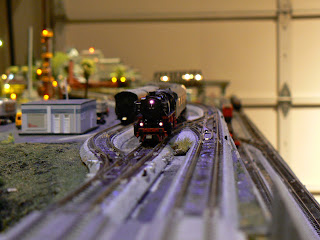 Second, while there are only two switches offered, a #4 and a #6, the fact that the switch motor is installed under the switch, thus removing either the unsightly switch machine sitting beside the turnout, and the excellent frog power capability and the great performance of these switches (i.e. no derailments) is another significant benefit of this track.

Third, the ability to connect, add power, and run trains and manipulate switches could not be easier. The fact that you can wire together a layout without touching a screw driver or stripping a single wire, is a feature that I love, although you still have the freedom to modify this as you wish.

And finally (at least for this post), since its more or less code 80, it is very compatible with Atlas, Minitrix, and other code 80 track (I've actually connected both Atlas and Minitrix track to Kato Unitrack without the need of their special adapter track and it works well...particularly for yard settings where the ballasted roadbed does not look correct).

Okay, so what are the cons? To be fair, these may not be 'cons' depending on your layout, pre-planning research, and rolling stock, and so on, but this is more a list of some of the 'issues' that I did find with Unitrack on my layout so far:

No Flex Track!!! Fleischmann has a similar ballasted roadbed track with a sort of 'flex track' piece, its really frustrating that there is no similar option for Unitrack. I did attempt (as mentioned above) to use transitions between Atlas flex track and the Unitrack, but while it worked satisfactorily, the appearance and commitment to matching the ballasting was more ambitious than I was ready for. 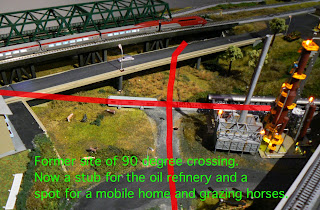 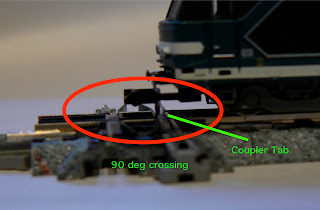 Curve Options. While Unitrack has many, many diameters to choose from, and the track system is extremely flexible in terms of combining curves, if you need to make minor realignments with your line, you are stuck. This is where flex track comes in very handy. I have an area of the layout where I need the tangent to move about 5mm or 1/4 inch, and there is just no suitable way to do this with Unitrack (that I know of). 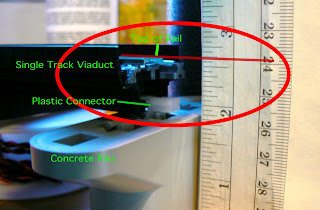 Beware of 2" Height Descriptions. One of the biggest challenges I had to face was thinking that the 2" piers and so forth for the elevated track sections, are actually considerably higher once you add in the plastic supports. Beware if you are building your adjoining sections of the layout to viaducts and other elevated sections using the piers that your actual adjoining elevation will have to be higher. If you use the Piers (which are two inches in height) and the plastic attachments, the top of your rail to your base is between 2 9/16 and 2 5/8 in elevation. I can't fault Kato as they are not wrong, but it would have been helpful if their dimensions measured the top of rail to base distance! 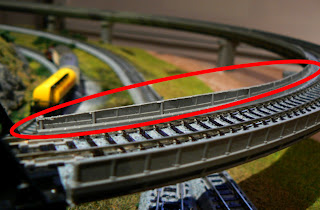 Single Track Viaduct clearance problems. The inside wall of the single track viaducts are too high to allow your longer passenger cars and rolling stock to go through. The problem is specifically with cars that are longer that 160mm, as I have a set with passenger cars that are 164mm which have problems on both the 282 and 315mm curves, however, my 161mm cars do not appear to touch the inside walls at any point. A very crude (and temporary) solution I had to apply was to sand down the inside walls with my belt sander. Still working on a better plan, possibly with a completely different approach to the elevated track in this area.
Overhead Station Clearance problems. Keep those pantographs down going through the Kato Overhead station! This may be a manufacturer specific only issue, but the pantographs on my Fleischmann electric will not clear the bottom of the Kato station. Since elevating the station is not a good option (the stairways that come with it would not fit right), you either need to install catenary that would push the pantograph down as it goes under the station, keep the pantographs down, or device a system to restrict the full extension of the pantographs on those models where this is an issue. I have noticed this is only a problem on those electric engines that have the capability to draw power from catenary. My Kato Thalys cannot do this, as the pantographs do not go high enough to encounter any obstruction from the station. The actual vertical distance from the bottom of the station to the base is just a hair under 2". However, once you add Kato Unitrack, the vertical clearance between the top of the rails and the bottom of the station is about 1 5/8. 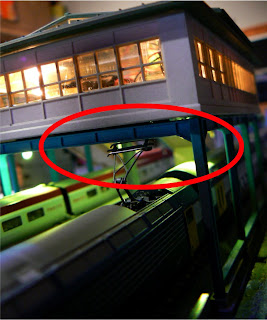 All things considered, the issues I ran into are relatively minor compared to some of the problems I've had with 'traditional' track. I also have to say that I tried to use both Atlas and Minitrix switches on the layout originally, but due to persistent derailments or frog conductivity issues, they were all replaced (except for a couple of Minitrix switches in my mill yard).

Its a great system! It will be interesting to see what Atlas does with its new competitive version of this system. If the two systems are compatible, this could be good news for us N Scale modelers!

For more in depth help, tips, and deeper commentary on the Unitrack system, I recommend the Yahoo Unitrack group and Karayan's Unitrack page, which both contain multiple links to various resources as well. I also go into some more detail on some successful features of this system in this post, which I think articulates some of the unique advantages and capabilities of this system.

UPDATED:  I take a look at Kato's new "super-elevated" curve tracks at this post.
Posted by Jerry at 9:29:00 AM