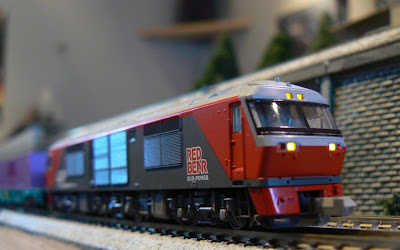 Another one of my recent acquisitions is the Kato model of a Japan Railways Freight DF 200 diesel locomotive. As is typical with most new Kato locomotives, the quality is great and the price and value are equally as satisfying! 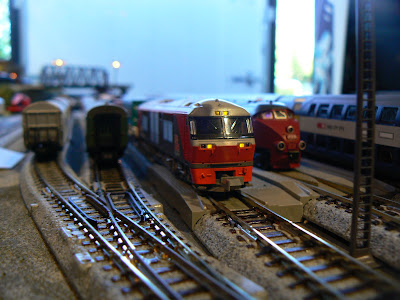 Although this model doesn't come in DCC, Kato has made it very easy to convert (let's hope this is the trend, and that their friends at Tomix pick up on this!) with the replacement of the 'stock' light board with a new Digitrax DN163K0a decoder (which is also a light board and the decoder all in one unit). Digitrax describes this decoder as being for US outline locomotives (GP'9's etc...) but it works just fine with the DF 200 with the only change being that you'll need to shorten the leads to the LED's on the ends (which will require a bit of soldering). A fantastic description and tutorial of how this was done is on the Japanese Rail Forum. 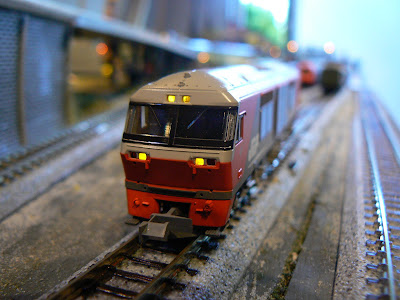 I have to also mention that this locomotive and decoder were easy on the wallet! The locomotive ran about $80 USD, plus another $35 for the DN163K0a, for a total of $115 for a nice DCC equipped loco! Hmmm...in an earlier post, I praised the NEM 651 interface, but with a little soldering, these Digitrax 'drop in' decoders are a pretty good deal too (and I like the price compared to the $45 and up cost for typical NEM 651 decoders!). Although I wasn't that impressed with the process when I made a similar installation on my Kato Thalys, this was relatively pain free!

Its a fantastic, seemingly powerful little locomotive, while at the same time, being much quieter than older N Scale locomotives (which is, I find, something I am starting to expect more and more whenever I hear an old 'growler' from previous decades!). I was really drawn to the "Bo-Bo-Bo" trucks on this modern diesel, and the "Red Bear" logo and branding gives this engine some distinct character.

Yes, I will pursue my heresy and run this alongside locomotives from other countries. The only reason I might have hesitated is that the 1:150 scale of this diesel might look out of proportion to other locomotives at 1:160, but I haven't found this noticeable. 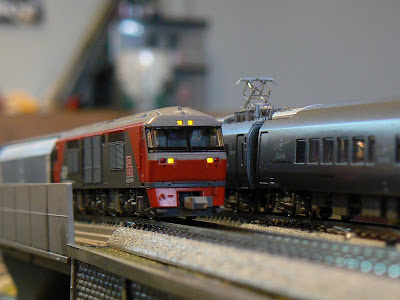