My first insipration and first purchase

What inspired me to make the switch from O Gauge was the Trix 2003 catalog. Somehow, a copy was given to me at the Toy Train Shop in Oakland California back in the Summer of 2003. This was still while is the middle of my "O Gauge' days, but I was also somewhat disillusioned with the hobby at that gauge for a couple of reasons. The scale is just too large, while its fun to hold and run these large locomotives and cars, building a layout and acquiring new equipment were very expensive. I also was not sure what railroad' line to model, and I did know that the space requirements for O Gauge were always going to be something of a challenge.

So seeing the Minitrix 2003 catalog triggered something in me. For one, my dad had built for me a small N Scale layout back in the mid-70's that counts as my first 'read' model train experience. So there was quite a bit of nostalgia in this scale for me. I also recall the Minitrix brand from those days. Needless to say, being exposed to the brand again after nearly 30 years brought a lot of excitement and joy to a hobby that, for me, was starting to become a burden. N Scale, and Minitrix, I thought, would one day be in my future.

We moved from the Bay Area (San Francisco, Oakland, etc...) to the Seattle area, where I build one more O Gauge layout in the 3rd stall of our three car garage (sealing it off with its own wall from the rest of the garage to make it a true 'room' rather than a garage space. This layout was a project and nearly complete, when in the Spring of 2007 it had to come pending a move (that never actually happened). Tearing down the O Scale layout was a mixed blessing, its sad to see something that you put so much work into get torn down, but I know that I could now 'start over' in model railroading with N Scale.

I put nearly all of my O Scale collection on eBay, and was able to use the money I made from these sales to start my N Scale / Minitrix era!!!

What was my first purchase? This nicely packaged set: The Minitrix Trix Systems Era IV Super Starter Set with 2 Trains and a Large Oval of Track (11120).

Why this one? For one, it came with a DCC system (the trix Mobile Station) which would help me make the direct leap into DCC without too much trouble, and I knew that I wanted digital control after having great success with in the O Gauge scales. A set is always a great way to get the ball rolling, and I like the combination of the diesel and the steam engine. 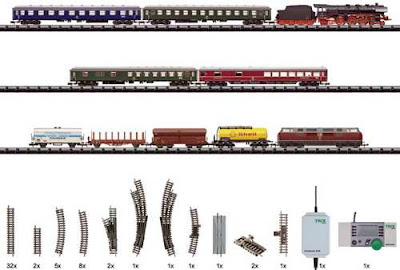