The Phantom History of Quinntopia 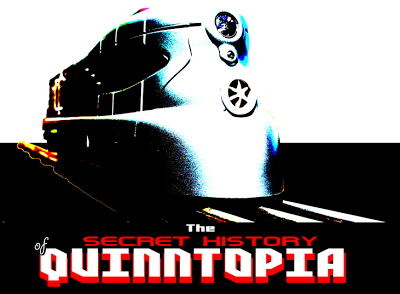 I was 13 years old and I was done with N Scale.

Goodbye ConCor PA's, Minitrix FM Switcher, Bachmann U36B, Rivarossi C-Liners and probably a few others that I just plain forgot about (still not sure where they ever wound up, but I'm pretty certain that my little brother ended up selling them at a swap meet!).  It is interesting that even by 1970's standards this was a pretty eclectic collection!

I was fortunate to have a dad that did expose me to this mysterious magic of 'trains'...here I am (probably late 1973 or 1974) somewhere in Montana.... 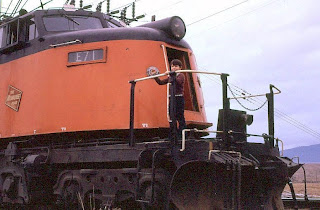 But by 1978 I was done with trains.  It wasn't so much 'girls and cars', as I was too nerdy for the former at that time, and too young/broke for any interest in cars.  For me it was mostly Sci-Fi (remember, the first Star Wars had just been released  and I was hooked!), Comic Books, Rock and Roll, and the early world of Atari, Intellivision and Mattel handheld electronics.

It wasn't until the late '90's, right after the birth of my first son, that a model train captivated my attention again. As I expect may have happened to many young parents....you make your way inside a local hobby or toy shop, and something more than you bargained for catches your interest.  This was 1998 and Lionel trains had just released a very controversial locomotive....the Pratt's Hollow Phantom! 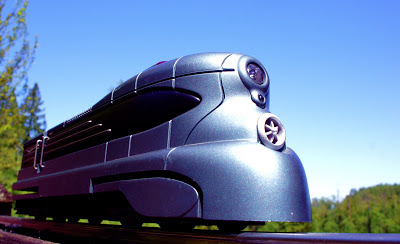 The obvious sci-fi and somewhat (!) retro look of this locomotive got me into 3-Rail O Gauge, something I had never had any interest in previously. I was also impressed with their "Trainmaster Command Control", or "TMCC" command system, a sort of proprietary DCC system Lionel developed. Clearly, my memories of the inadequacies of standard DC control from my childhood were still with me, and this new 'digital' system seemed like a cool way to have more fun running trains!

As the years went by, my O gauge collection slowly. I even built a layout in my garage when we lived in California:

When we moved to Seattle a couple of years later, another O Gauge layout was built in the garage: 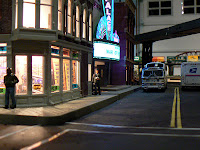 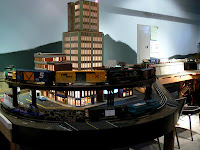 However, I was actually feeling somewhat frustrated with my 'new' hobby. The locomotives, rolling stock, and everything else is pretty expensive...on average at least 3 or 4 times the cost - if not more - for the same thing in N Scale. Of course, another drawback is that you really need a lot of space, and a lot of money, to do the kinds of things I wanted to have on my layout.

Then, I came across a Trix catalog in 2003 at a hobby shop in Oakland California (where we were living at the time), and the uniqueness, beauty and quality of the Minitrix line from that year blew me away. I was very quickly seduced from O into N.

A couple of years later, most (but not all) of my O Gauge stuff went up on eBay to fund my initial investment into N Scale. And the rest, is history! I still have the Phantom and its accompanying passenger cars, and I expect I always will. 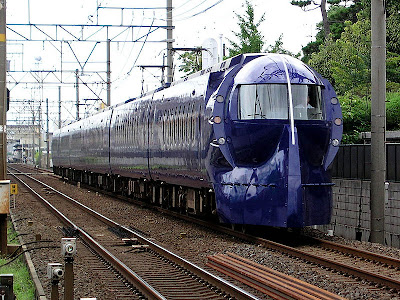 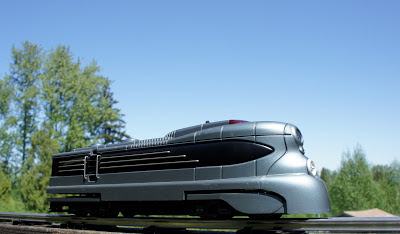 I may be posting this 'retrospective' of my model train hobby as I have the feeling (and this is has been a year) that it is time for a change.  The most obvious change that I am thinking of is to start a 'new' layout.  This means of course that the current layout must go.

Why a new layout? Despite how it may look to the viewer in photos and videos, there is much I need to improve on: Automatic / computer operation; more double-track main lines; a station or yard without terminal tracks; more reliable turnouts than the solenoid Minitrix motors; more sweeping curves and fewer tunnels; fewer grades; more space for the city; a more reliable tram line than I have now;  and probably a few more ideas have been in my mind for a while.

This is nothing new for many of us...the joy of the hobby is the progress/evoluation we make; with that 'perfect' layout or model being only the goal on the nearest horizon, not the ultimate culmination of the hobby itself.  Okay, that's too much philosophy for me!  I will post more on this of course when real changes start to be made!  As always, thanks for reading!
Posted by Jerry at 3:47:00 PM