About time Belgium got some love, huh?  Now I just need some passenger cars to go with it   Yes, the video shows the Class 18 pulling a load of freight wagons, which I know are un-prototypical for this class, but until Fleischmann produces its just announced SNCB coaches, I'm stuck with this locomotive pulling freights for a while!  One more crime against prototypical correctness from Quinntopia.  What's new?  Wait! That's no way to start a review!  Let's do this right! 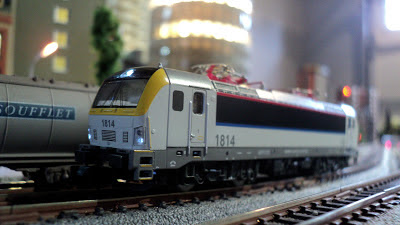 In all seriousness, this Hobbytrain interpretation of an HLE 18 class locomotive of the SNCB was on my want list for a while! It was also a Christmas surprise! Hobbytrain by Lemke, which also has a partnership of some nature with Kato, as well as Mehano and probably others.  According to a comment posted on YouTube with this video, there is a manufacturer in Korea that might be behind Hobbytrain's Vectron locomotives, which includes this one.

In terms of a proper review, most of this is covered in the video, however I'll pull out a few key things here on the blog:

Overall Impressions:
Striking, sleak, and modern looking.  Like the prototype, these Siemens Electric locomotives look contemporary.  What I like about this Vectron-style locomotive is the smooth angles that Siemens used to give a more pleasing, sleaker look.   Hobbytrain's model mimics this well, but there is a glaring and obvious shortcut that Hobbytrain used: printed vents and window hatches on the body.  The below photo shows the printed - rather than molded - vents on the cab. 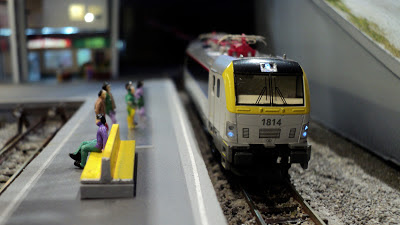 The below photo, well, most of them, show the forward cab window hatch which is also printed.  As far as I know this may be the only difference that these HLE 18's have from the Siemens Vectron loco's that they are derived from, but I won't be surprised if there are more shortcuts like this.

Paint is well applied however, with no evidence of any bleeding or softness to any edges.  Printing is sharp and legible at a level that I will never be able to read without significant magnification! 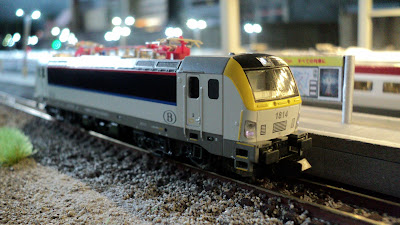 Conversion to DCC and Operating:
Conversion to DCC was one of the easiest I've ever done.  A standard NEM 651 decoder goes into a very accessible socket underneath the body shell.  Removing the body shell was a simple no-nonsense and easy separation of the shell slides with just a slight amount of tension until the engine chassis slides free. 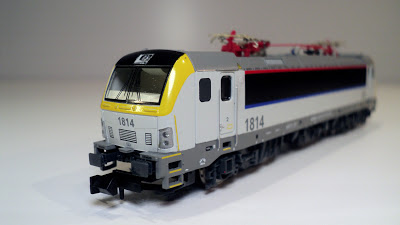 I've spent a little time operating this locomotive, and there are really only two things that come to mind.  The fist is that for whatever reason, this locomotive moves very nice as slow speeds, but then moves up at jack rabbit speeds very quickly (and unrealistically.  You can see a bit of this in the video during the 'Trains in Motion" segment).   I believe this is due to some needed adjustments to the decoder speed tables to resolve.  But as I used a brand new Digitrax decoder I am a little surprised as I've seldom had to make any speed table changes.  If I find a problem here I'll let you know, but for now, I'm assuming its a simple speed table solution.

The second thing is that its a bit noisy. More similar (in terms of noise) to my recent Piko locomotives that the very quiet modern Minitrix models.  Its not bad, just loud.  The motor does give off a sort of high frequency sound that makes it sound like its working really hard.  This may be normal and just more noticeable due to the louder motor, so perhaps not an issue.

Otherwise, the locomotive pulls pretty well.  In the video you will see the locomotive go under a roadway where it climbs a steep 2.5% grade to return over itself.  With the six or seven cars I had behind it, the HLE showed no signs of struggle at all with this grade.  I have other locos that definitely struggle up this little rise, so it seems like this locomotive will be a good puller. 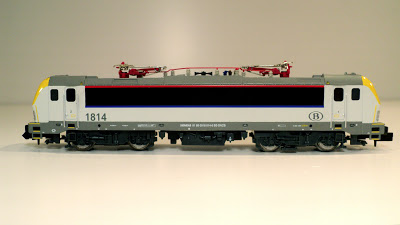 Belgium:
So...why Belgium? Well, why not?!  Seriously, Belgium is yet another European country with a fascinating and colorful rail history.  It has also been pretty well un-served in terms of N scale for most of this hobby's history.    That its unusual to see Belgian N scale trains is a part of the attraction for me!  If you are interested in this, I recommend a site from Belgium which is a part early 20th Century diorama project as well as a pretty exhaustive list of N scale material available for Belgian (most of it is artisan produced).  In the original Dutch here, or a good version of the site in English courtesy of Google Translate here.