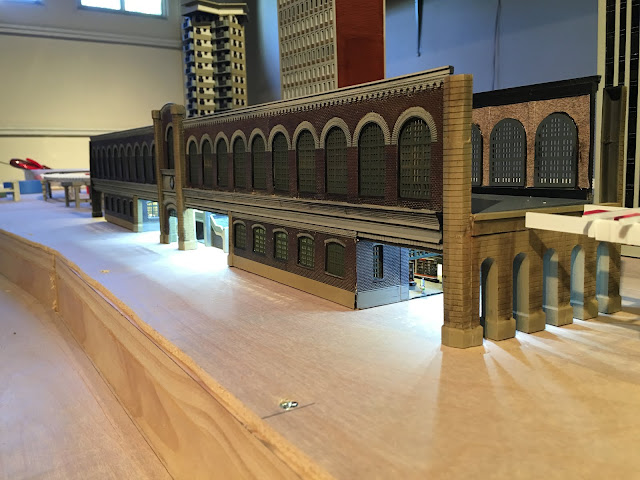 A major mini-milestone has been completed! The base for the Metro station is done and the overall station is now 75% complete! What began seven months ago as an idea to do something more classic than the Kato Suburban Station is finally nearing completion! Behold! The Latveria Metro Station! 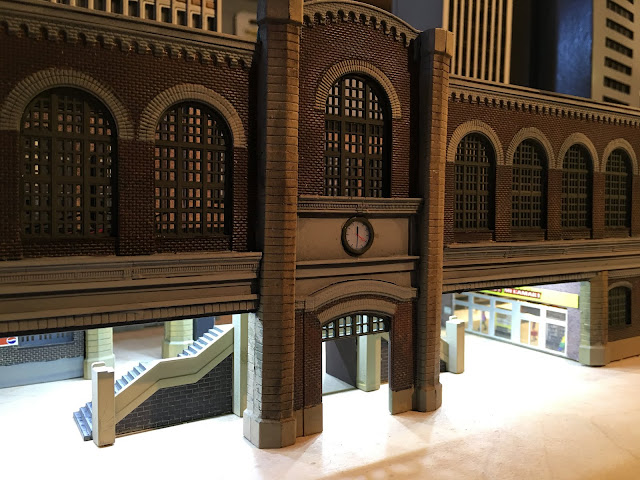 In addition to the four Walthers Northern Light Power Stations, the building also uses Greenmax Concrete Viaduct Piers as accents.  The only item surviving from the Kato station is the stairway shown in the above photo.  The above is the 'front' entrance' with a wide pedestrian arcade or entrance... 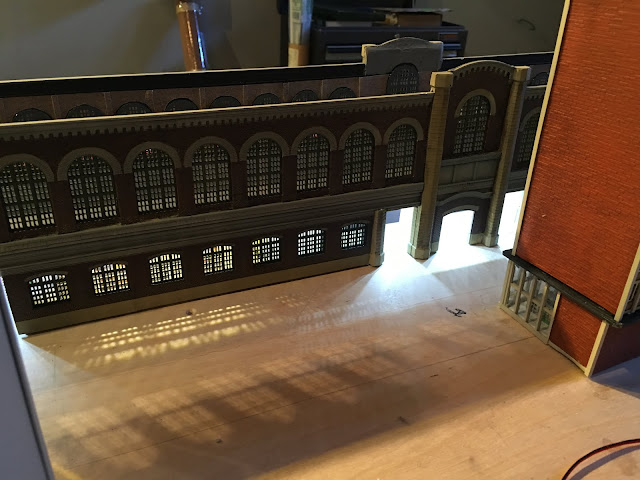 Above is the rear of the building.  Not much to say. I had hoped to NOT have to build a rear to this building to save both time and money, but no better plan presented itself for what to do on the back side, so another long cycle of cutting, gluing, etc... took place. 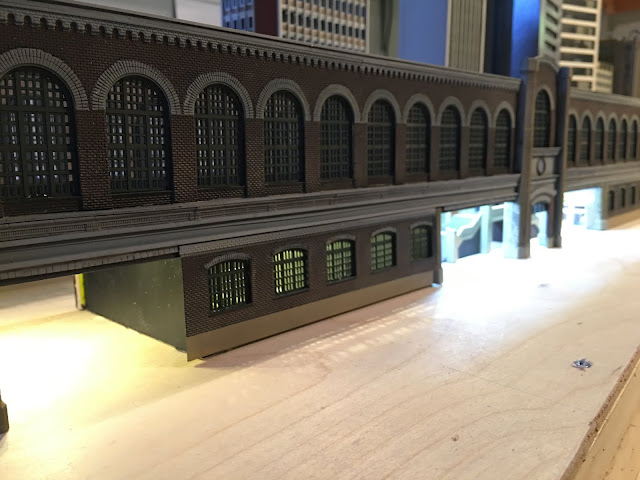 Another shot of the front of the building. The ground floor is lit with LED strip lights. I used two different colors...a 'white' LED for the common/public areas, and a warmer color for the interior shops. 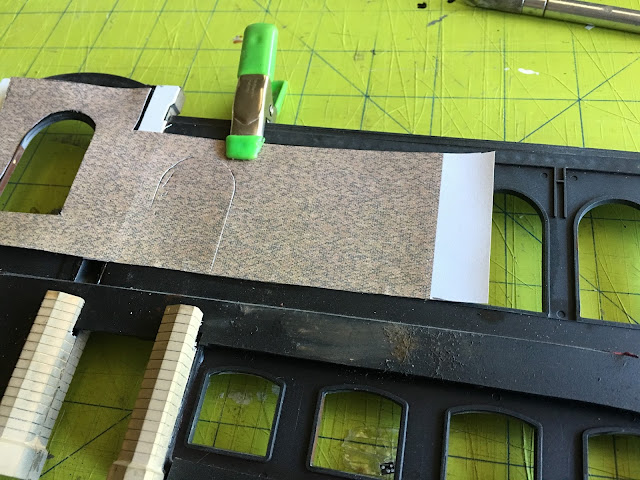 One of the major challenges to get to this stage was determining what to do with the interior facing walls of the train area.  Just painting the plastic would not look good. I thought of adding a thin styrene facade, but the idea of cutting out 40 windows was not something I was looking forward to. Fortunately, paper seemed like a good idea, and the website paperbrick.co.uk has a great tool for selecitng and printing multiple brick patterns. What a cool tool! Made my day. Above is a photo of the printed brick patterns being trimmed to fit the interior walls. 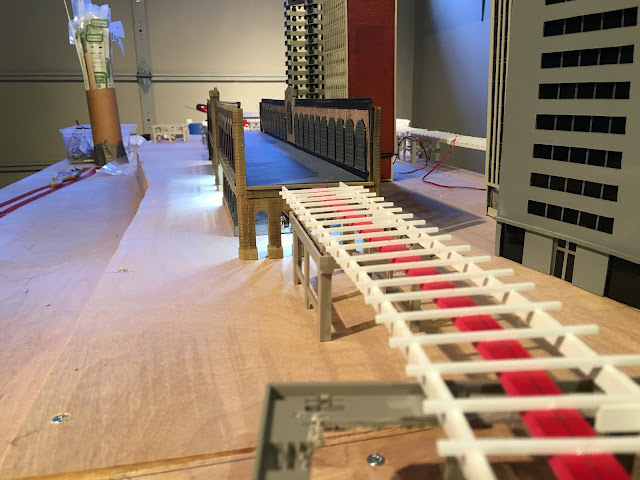 Now that the foundation is complete...I can work on finishing both the elevated metro track system and the platforms/roof/interior of the station. That means we're actually getting closer to running trains!

But not so fast...I still need to figure out how to automate the station stops for the metro trains. After futilely working with some non-conventional items, I am convinced I need to put on the big boy pants and go with a Loconet system / DCC / Computer (or Command Center) to automate these trains.  It seems the only really effective way to make it work.  Yes, SOME of you tried to warn me of this several months ago...I get it! You were right! :-0 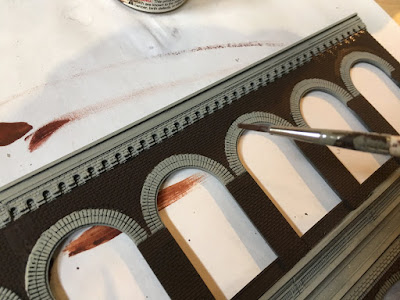 Painting continues on Latveria Station! I need to get the exterior painted, interior detailed, and lighting added so I can add the station to the elevated metro loop so I can start to assemble the city and then add track for the rest of the layout.  So this one little (well, not so little actually!) building is the lynchpin upon which all future progress rests!

Below I am starting to add walls for the ground floor of the station.... 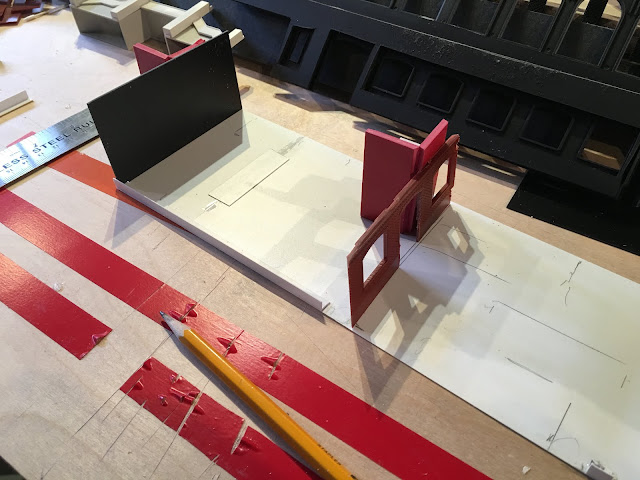 And in the photo below you can see that more color has been added.  I still need to tweak the colors a bit more and figure out what exactly I am going to do about the windows on this station, but it is finally starting to look like a structure! 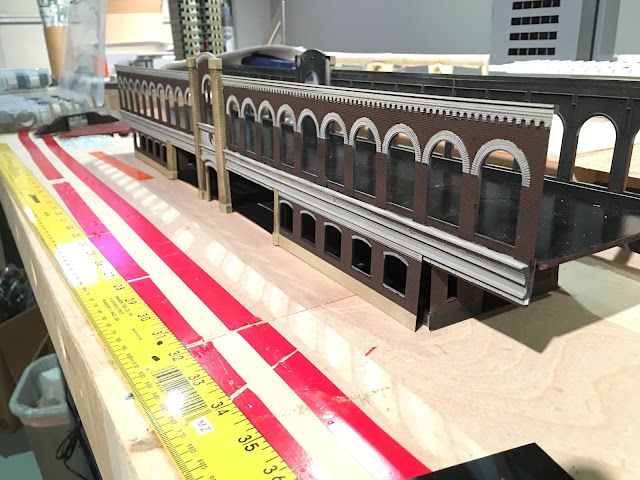 As I mentioned above, the elevated line is a key foundation for the layout, and in the section where it swings out over the main line I needed to scratchbuild my own elevated trestle so it would look realistic (which is not the same as prototypical!). 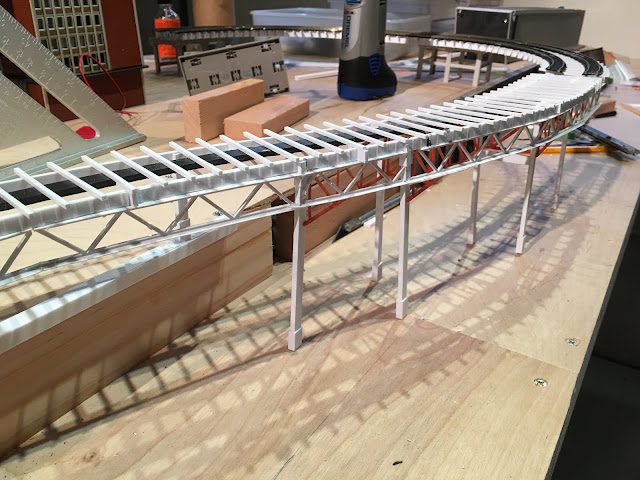 Here's another view of the girder work on the elevated section. I was a bit concerned with how this was going to turn out, but I think its going to look allright. 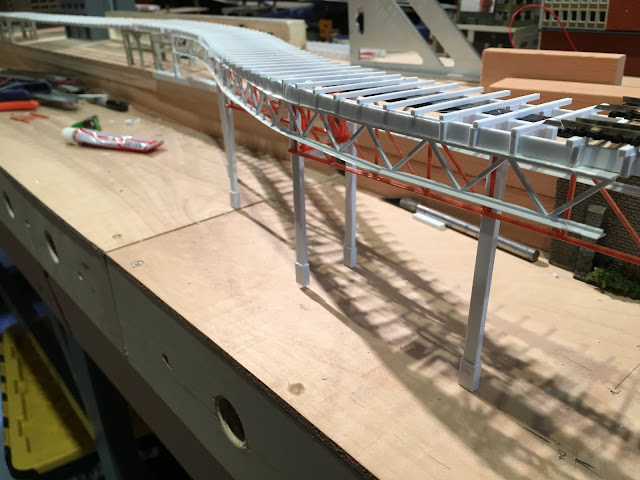