A short video explaining some of the latest progress.  Resolution may be better on YouTube itself.
https://youtu.be/kR0_yQoWRLI
Posted by Jerry at 10:14:00 PM 1 comment: 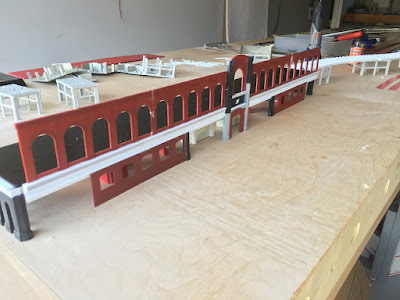 What!? I can't believe its been nearly two months since my last update.  Well, its not for lack of spending some time in the old hobby room (although work and other household priorities have been quite busy), but in fact, most of my hobby time has been taken up by a 'secret project' (which has been in the works for several years, and I hope to share on this humble blog shortly) and my impossible quest to figure out how to automate the timed stop for the metro line trains - without having to upgrade to a $600 'command center' or use some sort of JMRI based system (which I get bored reading about everytime I imagine using that sort of solution).  So, enough about projects NOT working out, there has been some progress on the Metro Station!.  As you can see above (which is a photo from about six weeks ago), I've got most of the facade for the station worked out.

The below shows what the approach from the elevated two-track metro line may look like... 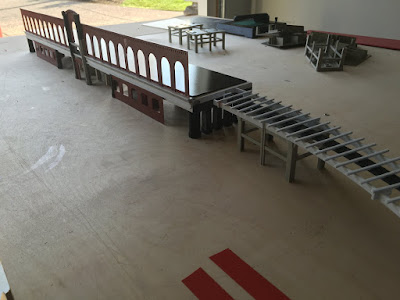 Below are some of the parts, details and related that I've been slowly accumulating for the station.  The below are 'girders' to go over the tracks and support the roof, they are from Luetke Modelbahn and are laser-cut wood.  For the exterior facade, merely adding in rows of different sizes of styrene (visible in white in the above photos) didn't provide enough detail, so I added in some interesting 'cornice pieces available from Hawk Wargames - made for wargames models of course.  Once I get into painting and weathering, I think these details will become more apparent. 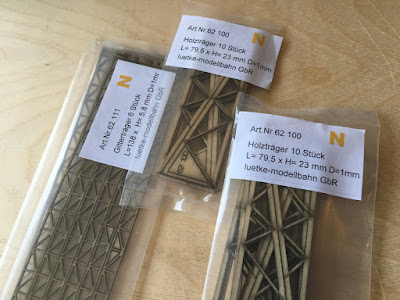 I originally wanted to wait on finalizing the elevated section until after I knew exactly where my rail gaps would have to be block isolation and all that, but I've decided I can still add my gaps (or at least plan on it) and get the entire elevated section complete, which has been the focus of today's project.

Below you can see the rough layout of the circuit for the metro.  Although its a boring oval, it will be obstructed by lot's of buildings, so that the entire circuit will never be completely visible.  I'm using red tape to layout some of the gradual curving portions, and then creating a template to create the actual structures. 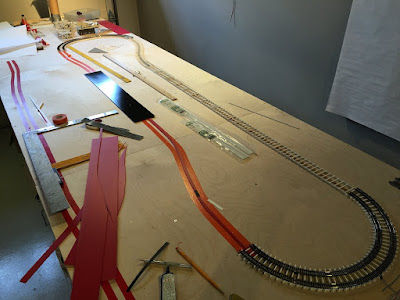 The facade for "Latveria Metro Station" is now primed, and I'm starting to lay out the rest of the structure, using various details and pieces from other kits to complete the look. 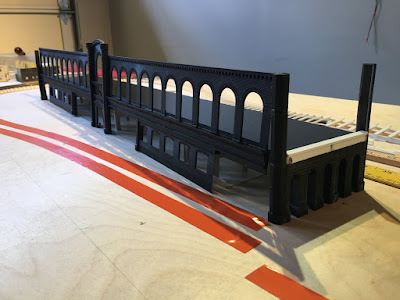 And that it is it for this update! I hope it won't take another two months for my next one!  Thanks for reading!
Posted by Jerry at 11:49:00 AM No comments: