As work on the layout grinds to a halt (see my comments at the bottom of this post), I thought I would share new product announcements that I have missed over the summer in case others (particularly in English!) did not hear or see some of these news items!

I'm going to try and briefly capture some of the 'big news' (new locos, new buildings, etc...) but not trying to be as ambitious as my 2012 video review of new release items!

Second, the 'news' section of the German N Scale forum "1zu160" is one of my pre-eminent sources of N scale manufacturer news outside of the normal North American sources.  Check it out if you haven't before, you may find it interesting.  Of course, its in German, but through the magic of the Interweb, you can have Google Translate it right into the language of your choice (although the translation is sometimes weird and makes no sense), here it is translated into English.  If you are looking for product announcements from Japan, I would use the Japanese N Scale Forum or subscribe to HobbySearch's new products email for model trains.

This is not really new news as this had been announced some time ago, but there is an alternative version of the Glacier Express set from Kato being released as a starter set.   I'm not into narrow gauge and have not ridden or seen this line myself, but I understand the excitement a lot of folks have for this (particularly those who have ridden on it!).
(Photo from the Kato website)

Another article on this new train release and its accompanying cars on the 1zu160 site covers some of the scale questions that arise from the production of a narrow guage train that will run on standard 9mm N gauge track (a common occurance for Japanese modellers, but it appears a newer scenario for some in Europe).

Arnold coming back to America!!!?? 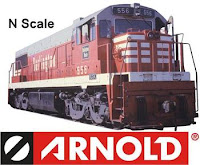 The increasingly global model train super-power of Hornby is now re-entering the US N gauge market with its Arnold brand!  While I don't model American, I think its fascinating news!
Photo courtesy of HornbyAmerica.

One of the things I like the most about passenger transit in Europe these days are the sleek, modern looking rolling stock and their colorful schemes!  The new Piko GTW 2/6 Diesel railcar (if it looks similar to the FLIRT its because they are both made by the Swiss firm Stadler) in this scheme for "Val Venosta" fits the bill for me!

Yes you read that right! Nowadays I think if you are a modeller on any continent wanting to reflect modern era scenery these wind turbines seem to be popping up everywhere!  From Tomix in Japan come these N Gauge Wind Turbines...that are solar-powered! Okay, yeah, its sort of a gimmick! But also sort of cool.  Photos from HobbySearch Japan.


Faller from Germany also makes a wind turbine, this time with a standard electric motor, although it seems to be a little pricier (but might be worth it if you really don't care to pay extre to have a totally unrealistic solar panel base on your wind turbines!).

Modern Blue High Rise from Cosmic
I still have to build by Cosmic Apartment building (links to my unboxing post), but I see that Cosmic is

continuing to release product in the N Scale range, now with these very blue and very modern high rise structures.  I am not certain if the 'window material' (or blue plastic) is something that could be lit from behind - so its not clear these would work on my layout.  Interesting idea! Photos courtesy of HobbySearch Japan.

They've also got a shorter, wider version of the same building available as well. 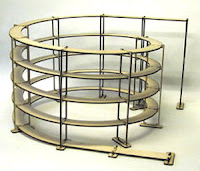 These are brilliant ideas for anyone who is contemplating building a layout that will require a hidden spiral to add some elevation to their layout and is also using Unitrack (or Tomix track).    The radii (right now for what appears to be just single track sections) are pre-designed for what Kato or Tomix track you are using (but seem limited to the smaller radii right now).  Of course, there are plenty of how-to's on the internet to learn how you can do this yourself, but this seems to me a much more complicated carpentry and engineering project that I would probably not enjoy or do a very nice job with! That's why I think these (again, available from HobbySearch Japan) kits (they are some thing you build and are made of engineered wood) from Cosmic could be a huge aid for lots of layout buildings.  Really cool idea.

This bit of news or information may seem like something WAYYYY out of left field for many of you, but I don't think it is.  As I've been publishing this blog and posting my videos, I've actually connected with quite a few war-gamers who, if not as thrilled with our trains and track, do appreciate the landscaping, modelling and structure work of our 'model train' layouts.  So its no surprise that some of them use N scale structures for their wargaming tables.

In this case, its going the other way maybe!  A war-gaming model company by the name of Hawk Wargames has a 10mm 'scale' game called DropZone Commander.  The 10mm scale is (as I understand it) somewhat close to N Scale size...maybe 1:150.  The '10mm' refers to the height of an adult figure in the scale.  This is pretty close to many of our N scale figures so the scale seems about right and is confirmed by others.   So that means you now have access to a pretty cool futuristic army for your N Scale Empire (yes....perfect for the Earth Defense Organization, no?)!

Or what is probably more realistic for many of us more traditional modellers is the building kits!  And what an interesting variety (and some great modelling and photos on their website!)! 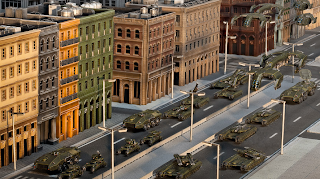 What's interesting is that it reminds me a little of the old 'modular' systems that Arnold and Busch used to produce back in the 1960's and 70's, but not quite.  Its a modular system, but they are opaque/solid (like the blue high rise above from Cosmic maybe) so they present a little challenge for me and my interests in lighting.  Its possible to mill out windows but not fun.  You can also order complete kits or choose what pieces you like the most....I do like the variety!  They also have various details as well which could be useful for anyone looking for extra touches for modern buildings!  These are a lot of fund and I can definitely see myself spending money on these (they also have some free buildings you can print out, so you can test the scale and look for yourself as well).

All Photos from Hawk Wargames/Dropzone Commander are their property and come from their website.
----------

That about wraps up some of the new or interesting things that I've seen over the summer! Thanks for reading!
Posted by Jerry at 6:00:00 AM 4 comments: