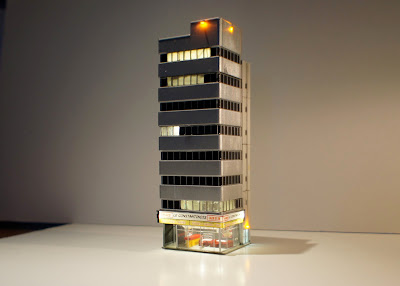 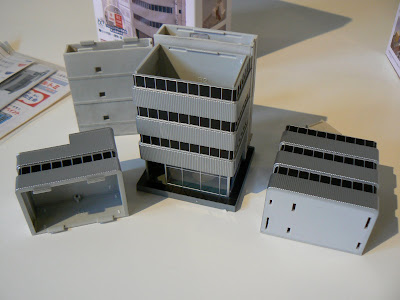 As you can see from the above photo, the building actually doesn't have windows (i.e. see-through, clear plastic!), so I had to mill out sections of the black painted plastic that passes for windows and hope to come up with a method to reasonably replace these sections with something that would be clear! 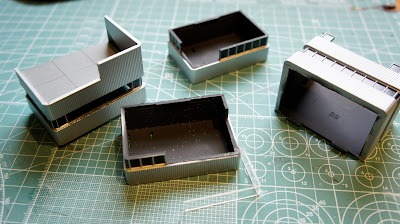 Ultimately I was able to fit some nice thin sheets of plastic into the areas where the solid plastic used to be, and used strips of very tiny styrene to make the window frames. 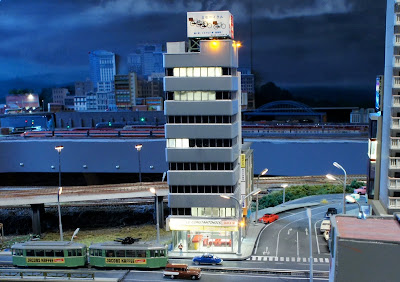 I added a small restaurant on the ground floor of the building.  This is actually based on a prototype I ate at in Paris.  Nothing spectacular, but the garish sign (difficult to make out in the photo unfortunately) looked right for the sort of 'greasy spoon' I was looking for! 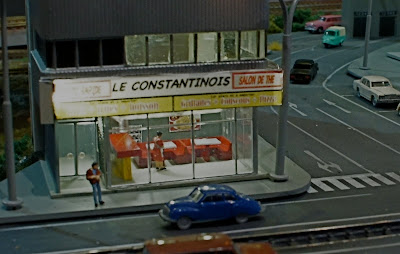 The slim, narrow shape of the building fits perfectly on the 'southern' end of Downtown.   While I only knocked out the solid plastic to create a couple of floors with lit windows, I think its enough to be convincing! 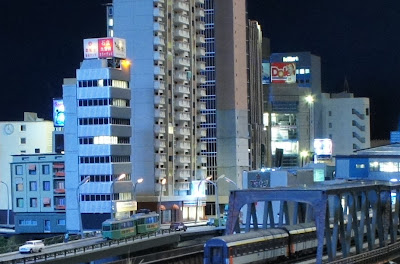 All I can say is summer is coming to a close...and model train season is almost here again! Whoohoo!
Posted by Jerry at 8:36:00 PM 6 comments:


Sometimes you get lucky. 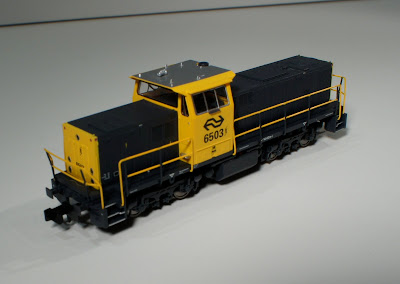 That's the way I feel about this little locomotive.  I spotted this model in a Minitrix catalog from 2004 or so, and tried to find one.  No luck.  I've come to the conclusion that Minitrix does not produce its Dutch models in anything near the volume of its German ones (no surprise there!).   So I kept looking.  After two years I finally picked one up from a seller on eBay from Singapore. 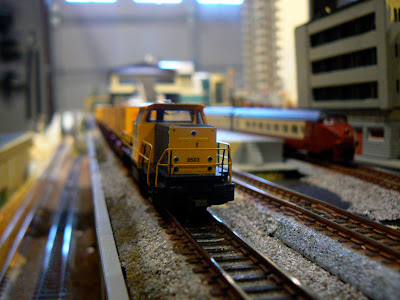 A European locomotive that most Americans would have some comfort with in terms of appearance, the NS Class 6400 looks similar to its 'cousin' the Mak G1204, albeit the prototype 6400 class is a bit longer (1.4m) than your standard G1200 and is a diesel-electric rather than a diesel-hydraulic. 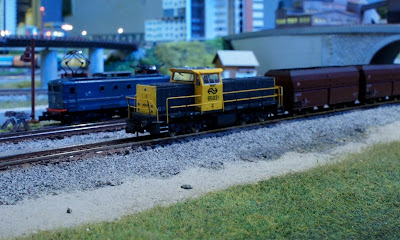 NEM 651 Blues:  Unfortunately, the so-called convenience of the NEM 651 socket is under-minded by whatever silly design Minitrix decided to use.  After fiddling around trying to figure out if my Sprog II was broken, the decoder was bad, etc... I ultimately discovered that the culprit once again was the decoder socket.  So I removed the NEM651 socket and soldered the decoder directly to the pads.  Problem solved. 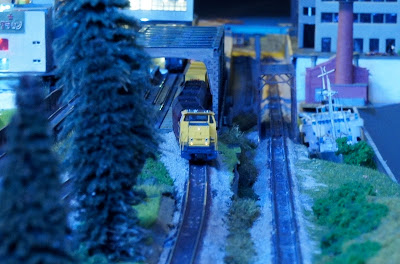 The good news is that its a smooth running, quiet little locomotive. 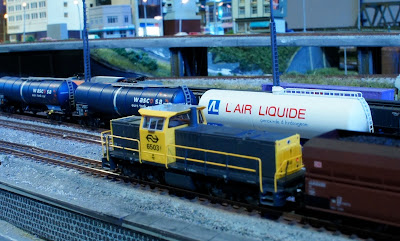 And, I have to say, I'm really glad I picked up one of these diesels in the classic Nederlandse Spoorswegen grey and yellow (everything is red these days apparantly). 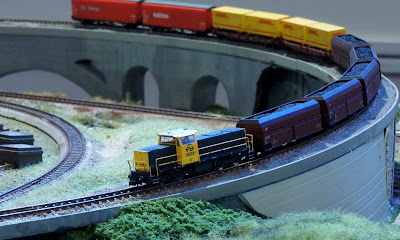 Despite the decoder socket problem, a great find and a nice little engine from our German friends at Minitrix!  Just go fix that decoder socket, guys, and I'll continue to be a fan!

The video at the top is a new one with just one locomotive (and a much slower pace than my last one!), the train the 6400 is pulling are the coal cars that I weathered in my last post as well.
Posted by Jerry at 8:09:00 PM 7 comments:


Weathering of rolling stock is yet another aspect of this hobby which interests me.  But putting a brush to these beautiful looking cars and locos also terrifies me!  Nevertheless, the amazing results that you can see of weathered rolling stock have motivated me to give it a try.

This forum is quite inspirational.  Some really breathtaking realism is on display there.  The below video is one of the finest tutorials on weathering I've yet seen.
So I designated some Roco hopper cars for my first victims that are:

Here is a 'before' shot (taken a couple of years ago, but its the best photo I have of the cars before I started weathering them): 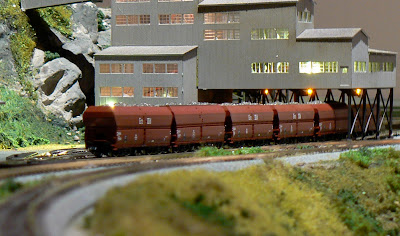 And here's a shot of the same hoppers (in the same location), after the weathering. 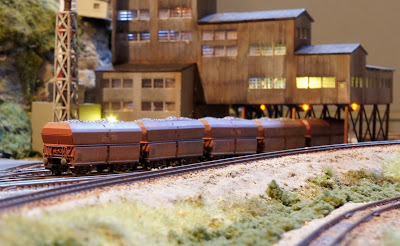 Okay, a little hard to tell given the different lighting between the two photos, but scroll below for some better shots.

Overall, I would rate the result and experience a 6 out of 10.  I didn't necessarily follow all the steps and advice (and there's a lot of different methods to weather, so it can be a bit overwhelming) but used what I had read or watched along with the materials I had on hand to try out some techniques and do the best job I could.

The first step was to apply a lighter shade of the 'red-brown' of the cars to give the paint that aged and sun-faded look.  This is such a common feature of rolling stock and locos that it was something I was very curious to test.  I mixed some Tamiya Red Brown's with some Tamiya Buff to get a color that was similar to the cars.  I then mixed a bit of Tamiya's Clear Gloss with the mixed color.  The reason for this was to dilute the amount of pigment in the paint with the clear gloss so that when I sprayed the color it would give a nice even, yet somewhat transparent, tone.

After applying this coat with my airbrush, I then used some rust powders to rust some of the parts where rust would occur.  I then attempted to use Testor's Dullcoat to lock in the powders and remove the glossy sheen from the previous airbrush coats.

This is where things did not go as well as I would have liked.  I'm not clear on what happened, but the Testor's Dullcoat did at least two things that I did not like: 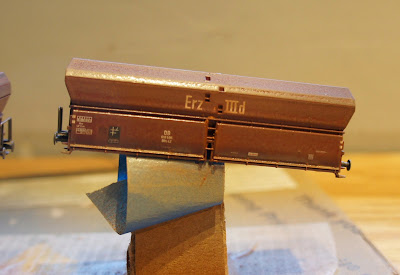 Fortunately, this is 'weathering' so there is a bit more tolerance for these sort of glitches than in any other type of finish application!

From this point, it was part 'damage control' and part experimentation.   My primary media at this pont was rusting powder, which I used to rub into any of the pockmark or pits in the laquer, and a wash of Burnt Umber, Brown, and dark Grey (oil paints with lighter fluid was my wash solution).   I continually applied various combinations to try and get a look that appeared right. 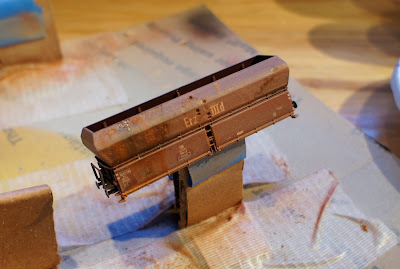 When I was satisfied with the look, I applied a final coat (I hoped) of flat acrylic paint.  THIS time I used Mr. Hobby "Mr. Super Clear" flat acrylic.  I'm not sure if Testors was the problem in the original coat of clear acrylic, but Mr. Hobby did a great job and I'll be coming back to this brand again (not as easy to find as the ubiquitous Testors brand, although I'm seeing it more often in some local hobby shops). 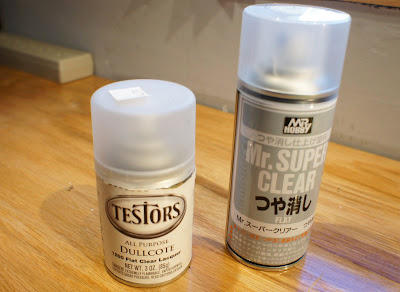 Finally, I used my airbrush to add a bit of 'brake dust' at the bottom of the cars.  I expected the airbrushing of the brake dust to be fairly straightforward and problem free - just a matter of ensuring not to apply too heavy of a coat! Unfortunately, I neglected to properly dilute my paint before painting (and didn't paint in the best of light!) so I got a few 'dots' where there should have been a nice even gradation! Arghhh!!!! 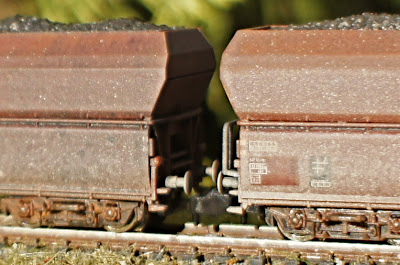 Fortunately, these were easily cleaned off with a bit of acrylic thinner and a cotton swab.  Taking off just the poor airbrushing was simplified due to the application of the Mr Hobby flat coat prior to airbrushing!

The final result, taken outside, is below. 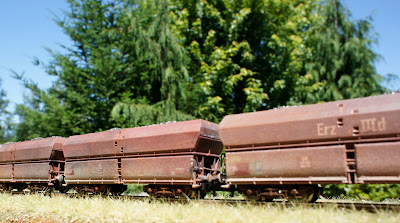 So, I learned a few things - but also have more questions and much to learn!  The result turned out better than the process, so I'm pleased.   I was also probably a bit lucky as well!  The rule about using this with relatively cheap pieces of equipment is a good one however, and I'll continue to 'test' out some weathering before moving on to the much more expensive locos!
Posted by Jerry at 9:46:00 PM 5 comments: