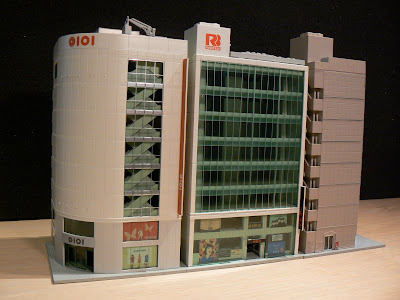 Upon returning from my vacation I was pleasantly surprised to find a rather large box from Japan waiting for me.  Inside were three of the four new buildings that Kato just released.  I ordered two of each of the [from left to right in the above photo] "5th Avenue Building" (23-437), the "Boutique and Office Buidling" (23-438) and the "Broadcasting Building" (23-436) with the predictable intention of 'doubling' them up and making them even higher than the 7 stories that they are sold as.

First of all, if you've bought any Kato buildings in the past, including their earlier 'high-rises', they've changed the packaging of these to these large 'blister pack' sort of containers (seen in background in the below photo).  The other change, slightly more significant, is that all of the stickers/decals are already preapplied.  There are no sticker sheet inserts or, for that matter, any parts to be added or installed at all.  The good news (arguably) is that Kato has done all of this work for you.

Kato seems to also be thinking of some sort of lighting option for these buildings.  There is a clear plastic insert that goes up the center of these buildings that is very similar to the clear plastic pieces they sell for lighting their passenger car kits.  I don't know if they built this so that a single LED could provide light to each individual floor, but its an intriguing possibility for simple lighting of these structures.

What is also probably evident in the photos of these building is that they are also considerably larger and have a lot more girth than Kato's previous series of high-rises.  I think this is a really good move as some of their high rises seemed a bit too narrow (even if its prototypical in many places of Japan and does allow for more buildings, the wider footprint of these new buildings are much more impressive. 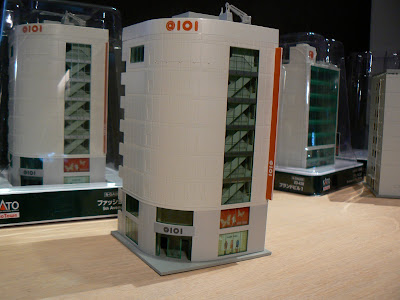 The "5th Avenue Building" has something I've wanted in a modern structure for a while, and that's a common 'curved' corner.  Although this rather large area of space calls out for some sort of sign, nothing was provided with the kit.  There are even small knobs in the surface that look like mounting posts for a billboard.

The stairways clearly visible through the green tinted 'glass' is another neat feature that gives this building a believable, modern look.  The ground floor detail, and the roof details with the neat little 'crane' on tracks, are certainly in line with, and an improvement on, some of the basic detail that Kato has offered in the past: 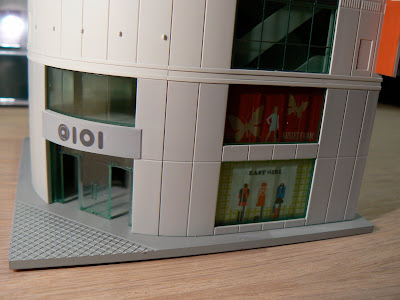 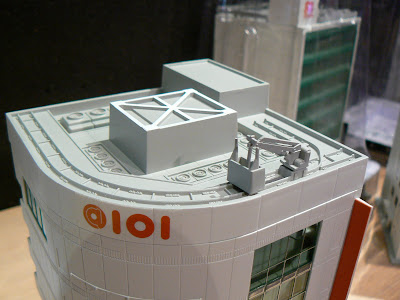 The Boutique and Commercial Building: 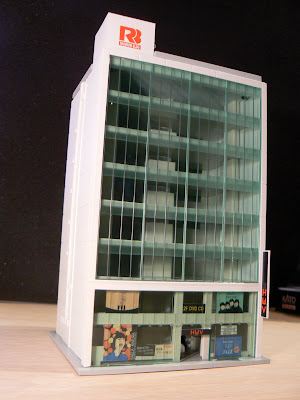 This building was the one that caught my eye when these were first announced.  The striking modern, green glass exterior really jumped out at me...there really hasn't been that much available with this very common modern look.

Again, ground floor details and roof details are nice (of course, the roof will look a lot better with some weathering) and represent respectable details for a mass-produced kit of this nature: 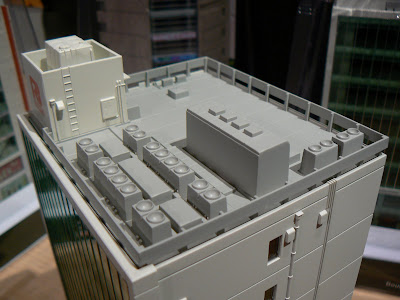 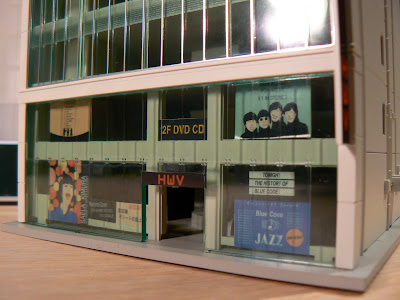 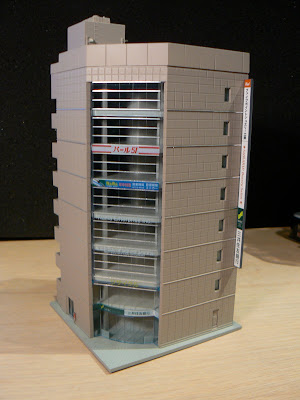 This building is not quite as interesting to me as the other two, but even still, its a great corner building and a big improvement (in my opinion) over Kato's last series of buildings.  I think there's some really interesting features on this building, the glass windows look good, and the exposed stairway is another cool feature that could be really interesting when lit carefully. 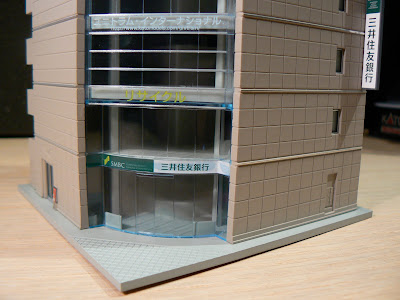 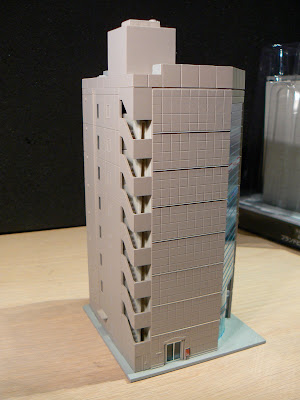 Observations:
One down side of the pre-applied stickers is that for those of us that wish to repaint our buildings, we'll lose those details.  I do plan on repainting these, even though the colors and paint they came supplied with is quite nice, if I am going to light these buildings up on the interior, I do think the light will shine through the walls, and I just can't have that!
If - like me - you're going to 'double up' these buildings to take them to 14 stories, you're going to have to do some cutting.  Take a look at my 'deconstruction' photos below to get an idea.
These are 1:150 scale, but when it comes to buildings, I usually find the variance between 1:150 and 1:160 with buildings to be negligible.  Even if you could tell an obvious difference, its so slight that it could also be prototypical correct as I don't think that every high rise has uniform floor heights.  The floors measure 7/8" or slightly over 22mm, which is about an eighth of an inch more than the 3/4" floors on the Atlas skyscraper or DPM Hilltown Hotel.

Deconstruction:
Since I'll eventually be repainting, detailing, and lighting all of these buildings, I was curious as to the potential damage I may cause to this building in the process of taking it apart for painting.  Similar to Kato's other buildings, disassembly is easy as there is no glue used anywhere in the construction (which in my mind is just pure genius on Kato's part), however, care must be taken as the tabs that hold the building floor onto the building are pretty tight and take a little effort to remove the bottom to get to a point where it starts to come apart: 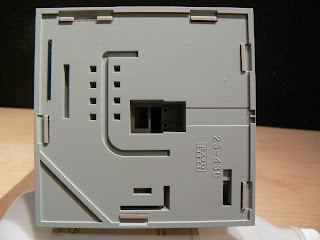 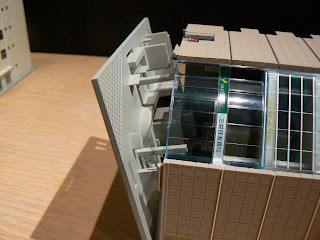 Once you get those tabs freed from the bottom piece, everything sort of 'slides' right out.... 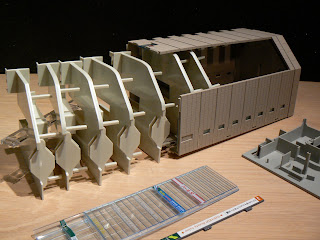 Once all the floor/window sections are removed, there were 4 screws holding the roof in place. 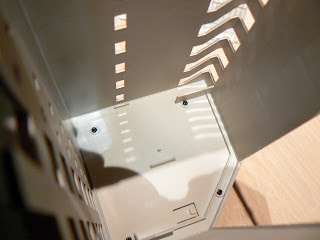 With the screws removed, the roof section slides off and the building is dissembled into its component parts of painting, etc...  However, you'll notice that the top of the building has about a 1/2 inch of material that will probably be removed (by cutting, scoring, sanding) to get a seamless look to all 14 stories (well, it will actually be 13 stories when you account for the extra 'ground floor' that won't be reused for the 'top half'). 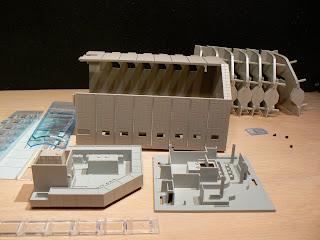 That's it! I have to say, I'm very impressed with the advancement that Kato has made with these buildings.  For now, they still need to be ordered from Japan as it doesn't seem like Kato USA is marketing these just yet.  For those of us that have been looking for more modern looking high-rise structures, Kato has done the 'urban modeller' a real favor and they represent a huge step forward in detail and quality compared to the Tomix High Rise building from a few years ago.  While these buildings are relatively pricey, I actually think they're a good value (particularly when you consider what Atlas skyscrapers go for on eBay these days!).  That's all for now!
Posted by Jerry at 8:48:00 PM 6 comments: 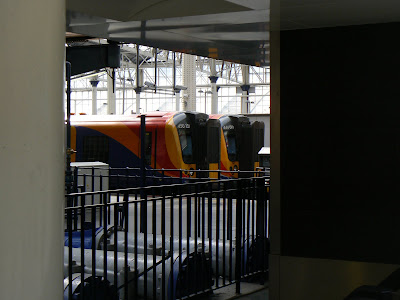 Greetings from Europe! Yes, that explains the unusually long amount of time since my last post in early June.  I'm presently in the delightful country of Norway staying with family, but transited here through stops in both London and Paris.   Thanks to some really helpful suggestions from Pierre and La Saucisse on a previous post, I was able to visit some very exciting hobby shops in Paris (having already discovered that there's nothing in London, nor in Norway as near as I can tell-at least not in N Scale) which I'll share on a later post.  As I've had a lot of time to 'day dream' about my layout, I've had some time to think and imagine some new changes that I'll further refine when I get back home.  For now, here are some 1:1 'scale' shots of a quick journey to Waterloo Station and Gare D Nord etc... 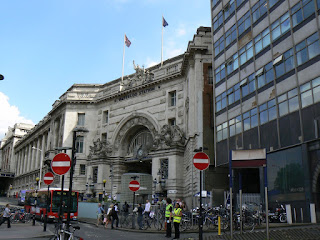 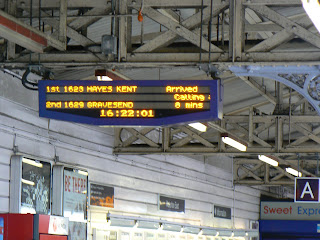 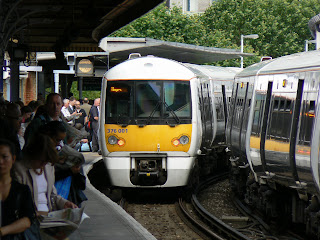 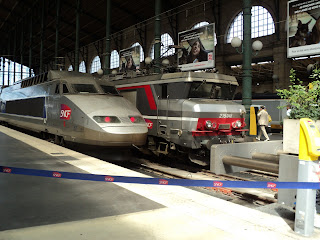 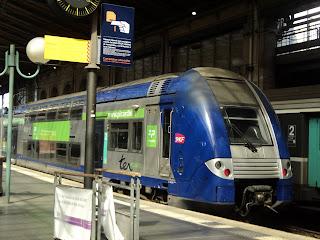 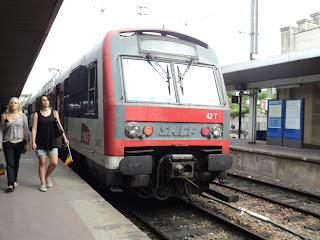